Click on the links below to learn more about current projects of the TACC Group, and scroll down to see completed projects.

Subcellular Energetics in Sepsis, Inflammation, and Stress
A growing body of data suggests that while cells will eventually die if energy supplies are restricted, a major contributors to death in most forms of stress include oxidative stress and membrane destabilization leading to ionic disturbances (e.g. calcium accumulation), and not necessarily the inability to generate ATP through oxidative phosphorylation.

We have developed broadband near infrared spectroscopy (NIRS) equipment capable of measuring the oxidation state of cytochrome aa3 (CytOx)in real time, non-invasively, which we validated using the cyanide injection model [Thiele RH et al. Can J Anaesth. 64(4):376, 2017].  We are the third group to develop and validate such equipment (following Cooper et al. at UCL, and Lee et al. at UC-Irvine). 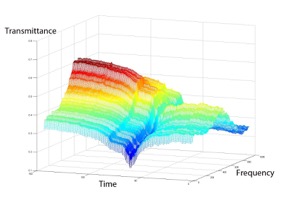 Broadband NIRS produces a spectrum of light absorbance over time, which can be displayed as a surface plot (and analyzed in MATLAB using matrix algebra) 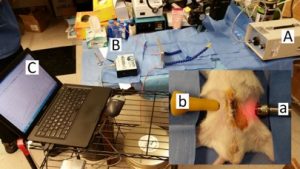 We are currently using NIRS to look at the oxidation state of cytochrome aa3 in stroke and sepsis models.  This work is funded by the Society of Cardiovascular Anesthesiologists (Starter Grant) and the National Institutes of Health (K-08, NIGMS)

By performing Fast Fourier Transformation of infrared signals reflected from human face, a clear spike is visible at both the respiratory (0.2 Hz) and cardiac (~ 1 Hz) frequencies

Recent work conducted by both Medtronic and Philips has been published in Anesthesia & Analgesia.  To date, no group has been able to measure absolute values of oxygen saturation, although trend monitoring has been demonstrated.  To improve on this technology we use a suite of dedicated monochromatic cameras with band-pass filters capable of measuring specific wavelengths at high frequency.

Ultrasound-Guided Neuraxial Anesthesia
Dr. Mohamed Tiouririne is currently working with Kevin Owen, Dr. Will Mauldin, and Dr. John Hossack in the Department of Biomedical Engineering on an innovative approach to neuraxial anesthesia. This approach uses advanced ultrasound technology to help the clinician locate the bony structures surrounding the spinal cord, potentially making epidural and spinal anesthesia safer. This project has received funding from the Wallace Coulter Project for Translational Research.

We have additional projects planned that cannot be easily described by a paragraph or two on this website. If you are interested in collaborating with us in some capacity, please do not hesitate to contact us at anesthesia-technology@virginia.edu.

Check the links below to find out more about completed projects.

Knowledge of both arterial (SpO2) and venous (SvO2) oxygen saturation is critical for practitioners interested in assessing oxygen supply:demand matching. Oxygen supply (DO2) is related to cardiac output, hemoglobin concentration, and oxygen saturation. Demand is related to the ability of tissues to consume oxygen (which is dependent on multiple factors such as activity level and temperature). While invention of the arterial pulse oximeter was transformative in that it provided an early warning for oxygen saturation, it tells us nothing about the other two components of DO2 (cardiac output, percent hemoglobin) and thus about the adequacy DO2. Knowledge of oxygen consumption (VO2) is important, because tissues can only extract a certain amount of oxygen, after which they begin to rely on the dreadfully inefficient (and ominous) process of anaerobic metabolism (this occurs around an extraction ratio of 0.5)

The goal of venous oximetry is to tell the clinician whether DO2 is adequate in the context of VO2. Knowledge of SvO2 allows one to calculate the extraction ratio ([SpO2 – SvO2] / SpO2) and thus manage hemodynamics with the goal of preventing anaerobic metabolism. This concept was displayed beautifully by Emanuel Rivers [Rivers E. NEJM 345: 1368, 2001], who realized massive reductions in mortality when central venous oxygen saturation was monitored (and hemodynamics were managed so that ScvO2 was > 70%). Unfortunately, measurement of ScvO2 and SvO2 require the placement of central venous catheters and pulmonary artery catheters, respectively.

Our goal is to develop devices that can measure peripheral venous oxygen saturation (SxvO2). Whether such devices can be used similarly (to ScvO2 or SvO2) is not known. In our first attempt, we used a Nonin OEM III probe to record red and infrared over the veins of volunteers and found saturations compatible with venous blood [Thiele RH et al. Anesthesia & Analgesia 112: 1353, 2011].

Traditional means of measuring volume status (CVP, PCWP) are woefully useless. Respiratory variation in the peripheral arterial blood pressure tracing has been shown to be the only metric that predicts the hemodynamic response to a volume infusion. We have several ongoing projects in this arena:

Dr. Julie Huffmyer recently completed a clinical trial of the Glucommander® (Glytec Systems, Greenville, SC), an “intelligent” computerized algorithm that directs the administration of intravenous insulin by taking into account both current glucose levels as well as an estimate of the patient’s insulin sensitivity. The Glucommander® (utilized in 30 post-cardiac surgery patients) significantly decreased average glucose and significantly increased the amount of time spent at dal (120-150 mg/dL) as compared to 35 patients treated in accordance with the standard of care.

These data were presented at the 2012 Annual Meeting of the International Anesthesia Research Society (IARS), where Dr. Huffmyer’s investigation won the award Best in Meeting, Patient-Oriented Research.

Measurement of blood pressure at least every 5 minutes is an ASA standard. Clinicians often measure blood pressure more frequently; during major surgery, blood pressure is measured continuously, using an intra-arterial catheter (a-line). Unfortunately, arterial catheters have drawbacks, including risk of nerve injury, vascular occlusion, hematoma, and infection (the latter of which is now thought to be as high as the risk for central venous catheters). Tonometry offers a promising alternative to the a-line. It is completely non-invasive yet still works in real-time. We are testing the ability of a new tonometric device (the Tensys T-line, Irvine CA) to measure blood pressure and respiratory variation during major surgery.

Sentec AG (Therwil, Switzerland) has developed a completely non-invasive arterial CO2 monitor, the accuracy of which has been well-validated in a variety of clinical studies. We tested the utility of this device in the post-anesthetic care unit at the University of Virginia Health Sciences Center, and found that virtually none of the traditional predictors of respiratory complications due to obstructive events were predictive of hypercapnea in the PACU (presented at ASA 2011, manuscript in preparation)