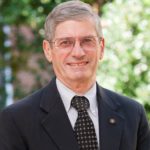 An internationally recognized leader in endocrinology, Dr. Carey has focused his clinical interest on cardiovascular endocrinology, adrenal disorders and hypertension, and his research on the hormonal control of blood pressure and hypertension. Major discoveries include the first identification and characterization of the intrarenal renin-angiotensin system and the intrarenal dopaminergic system as independent tissue hormonal systems, the tissue distribution and functions of the dopamine D1-like receptor family and the angiotensin type-2 (AT2) receptor and the role of renal cyclic GMP in the control of sodium excretion and blood pressure. Dr. Carey also documented the first case of ectopic corticotropin releasing factor as a cause of Cushing’s syndrome.

Dr. Carey served as Dean of the University of Virginia School of Medicine from 1986 to 2002. During his tenure as Dean, Dr. Carey founded departments of public health sciences, emergency medicine, radiation oncology and physical medicine and rehabilitation. He initiated the clinical trials center, the biomedical ethics center, the humanities in medicine program, the generalist medicine program, the global health program, the digestive health center of excellence and the clinical cancer center. He developed new research centers in cell signaling, structural biology, retrovirology, reproduction, immunology and cardiovascular sciences. Dr. Carey constructed four new research buildings and a conference center and developed architectural plans and funding for a fifth research building for the School of Medicine. During his 16 years as Dean, National Institutes of Health (NIH) funds to the School of Medicine quintupled, private fund raising increased 12-fold and 60 endowed professorships were established. The School of Medicine markedly strengthened its basic medical sciences, interdisciplinary research centers and programs and University-wide collaboration in research and teaching during his deanship.

Born in Lexington, Kentucky, Dr. Carey received his medical degree from Vanderbilt University in 1965. He completed his residency in medicine at the New York Hospital-Cornell Medical Center and fellowships in endocrinology with Dr. Grant W. Liddle at Vanderbilt and in hypertension with Professor Sir Stanley Peart at St. Mary’s Hospital Medical School (now Imperial College) in London, England.

Dr. Carey began his career in academic medicine at the University of Virginia in 1973. As Director of the Division of Endocrinology and Metabolism from 1978-1986, he developed the program into one of the best in the country (highest ranking #5 by U.S. News).

Highly respected by his peers, Dr. Carey is author or co-author of over 400 scientific articles and author/editor of three books. He has maintained a productive NIH-funded research program since 1973 and has been a strong advocate for biomedical research nationally. He has been a member of the National Research Resources Advisory Council (1994-98), has chaired two strategic planning processes (1997 and 2003) for the National Center for Research Resources, and has been a member of the Association of American Medical Colleges (AAMC) Advisory Panel on Research (1998-2003) and the Clinical Research Task Force of the AAMC. For The Endocrine Society, he has been a member of Council, the Finance Committee, the Research Committee, the Nominating Committee, the Awards Committee and the Hormone Foundation Board of Directors and has chaired the Development Committee, the Advocacy and Public Relations Core Committee and the Scientific Statements Taskforce. Dr. Carey was President of The Endocrine Society 2008-09, during which time he founded the Endocrinology and Society and the Scientific Statements programs of the Society. For the American Heart Association (AHA), Dr. Carey is Past-Chair of the Hypertension Council and of the AHA Council Operations Committee and has been a member of the AHA Board of Directors. He also chaired the AHA Scientific Publications Committee for two terms. Dr. Carey currently co-chairs the AHA/American College of Cardiology Clinical Practice Guidelines Writing Committee on Hypertension and chairs the AHA Scientific Statement Writing Committee on Resistant Hypertension.

The Dean Robert M. Carey Award, initiated in 2003 by University of Virginia medical students, honors a member of the second year class exhibiting qualities of leadership, scholarship and building a sense of community during the first two years of medical school. The Carey, Marshall, Thorner Scholars Research Day of the Department of Medicine was initiated in 2007. In 2003, Dr. Carey received the Thomas Jefferson Award, the highest honor bestowed by the University of Virginia, for transforming academic medicine at the University.