1) Endosomal function and dysfunction in neurons.

Many diseases of the nervous system (neurodevelopmental and neurodegenerative) as well as degenerative and regenerative processes after injury can be traced at the cellular level to disruptions of endolysosomal pathways, including autophagy. For example, Alzheimer’s disease, Huntington’s disease, and nerve injury all show profound defects in endosomal trafficking. This is not surprising given the central role of the endolysosomal system in regulating not only “cellular trash removal,” but also the quantity and quality of signaling cascades. The Winckler lab has unique expertise in studying endolysosomal trafficking in neurons and has shown that endosomes in neurons use different molecular machineries from non-polarized cells (Yap et al., 2008; Yap et al. 2010, Lasiecka et al. 2010; Yap et al. 2012; Lasiecka et al., 2014). We are particularly interested in the roles neuronal-specific proteins, (for example the neuronal-enriched endosomal protein NEEP21) play in neuronal endosomes. We are making extensive use of live imaging to understand the function and regulation of neuronal endosomes. 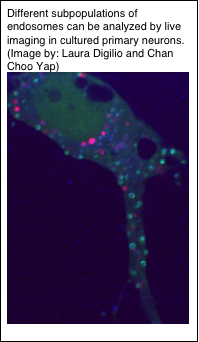 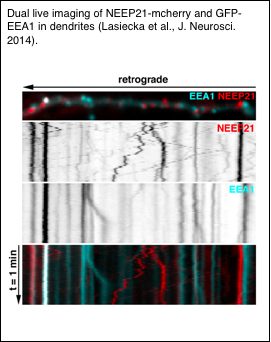 While studying the targeting of the cell adhesion molecule neurofascin, our lab recently discovered a new role for the Lissencephaly-linked doublecortin protein (DCX). To date, most work has focused on the role of DCX in regulating microtubules (MTs), and thus on the question of how DCX mediates migration, axon and dendrite growth via MT regulation. However, several other binding partners of DCX have been identified, including neurofascin (NF) and clathrin adaptors (AP) suggesting additional roles for DCX in regulating cellular adhesion and membrane trafficking. Our central question is: do these additional binding interactions mediate additional subcellular functions of DCX in addition to MT regulation, and if so, are these important for aspects of neural development, such as neuron migration, axon outgrowth, and dendrite arborization? We found that DCX regulates the surface distribution of neurofascin by increasing its endocytosis. This is a novel role for DCX. Importantly, the newly discovered endocytic role of DCX does not require microtubule-binding of DCX. Our findings thus open new avenues for studying and understanding additional roles for DCX in neurodevelopment. 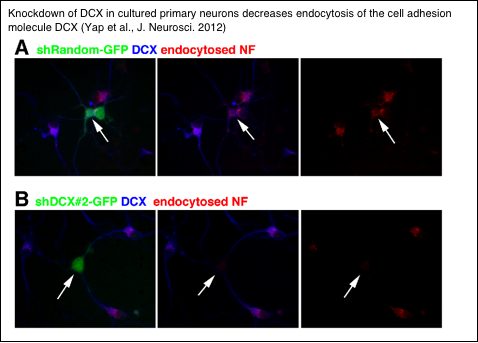