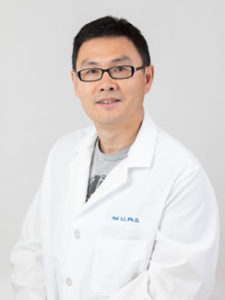 Since its discovery, gene fusions have been viewed as unique features of cancer and they all result from chromosomal translocation. Our recent findings have turned this dogma “on its head.” We have shown that the fusion products can be present in normal cells and they can be made through a mechanism that doesn’t require DNA translocation. Precursor mRNAs from separate genes can be joined by “trans-splicing” and the chimeric RNA can then be translated into fusion protein. The lab is now working on finding more examples of “trans-splicing.” For that, we are taking two approaches: 1. candidate gene approach which involves stem cell culture and differentiation 2. genome-wide search approach which relies on bioinformatics analysis and deep sequencing technology.

Second focus of the lab is related to some recent findings of Genome-Wide Association Studies (GWAS). People have used the technology to find single nucleotide polymorphisms (SNPs) associated with higher or lower risks of many phenotypes including prostate cancer, diabetes, inflammatory bowl disease, even body height. The problem is that the studies often identify a lot of SNPs with no significant relative risks. What’s more, the SNPs are often located outside of the coding region of any gene. The gene we are studying has several SNPs that have been demonstrated to give carriers high risk for type 2 diabetes and lower risk for prostate cancer. We have shown the risk allele for diabetes is associated with higher expression level of the gene and knocking out the gene in mice has a protective effect against type 2 diabetes. We are now working to characterize the metabolic phenotype of the knockout mice and evaluate them for the risks of prostate cancer 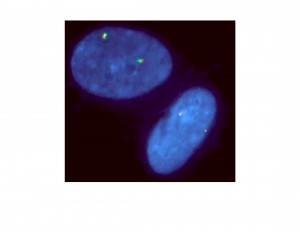 What you will learn on this rotation: