Most typically, when we think of constipation, we think of hard and painful bowel movements, but there are many other symptoms than can occur. 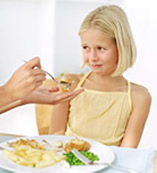 In many children with chronic constipation, the large intestine gets stretched out of shape (“megacolon“) and the child passes extremely large bowel movements — sometimes so large they clog the toilet!

Because of the pain associated with bowel movements, some young children will refuse to pass bowel movements or even attend to the toilet. This can lead to all sorts of conflicts and behavioral difficulties.

Many children who suffer from chronic constipation have changes in appetite. Parents often notice the child gets full very easily. They will sit down at the table, eat several bites, and then complain that they are full. These children are often described as nibblers or grazers because they eat little bits throughout the day rather than three square meals. Some parents notice their child’s appetite improves dramatically for several days after they pass a large bowel movement, but then it slowly declines again.

Many children with chronic constipation complain of frequent abdominal pain or cramps and they are often quite irritable and/or disagreeable.

Some children with chronic constipation have recurrent attacks of nausea and vomiting. This is because the stomach empties much more slowly than usual when someone becomes constipated.

Chronic constipation can cause a number of urinary problems. The bladder sits right in front of the rectum so if the rectum becomes enlarged and is chronically filled with stool, there may be less room for the bladder to expand with urine. Many children with chronic constipation seem to have small bladder capacities and have to urinate more often than usual. In some children, constipation may cause recurrent bladder infections, bedwetting, urinary dribbling, or difficulty starting their stream.

In older children, long-standing constipation can be associated with leakage or smearing of stool in the underwear. As the large intestine gets stretched larger and larger, liquid stool from the small intestine begins to “leak” around more formed stool in the large intestine. In the the beginning, the leakage is usually very small and most parents just assume the child isn’t wiping very well. As the large intestine stretches further, the amount of leakage increases so that eventually children begin having “accidents”, passing whole bowel movements in their underwear! This is called encopresis. Since these accidents represent “leaking” of soft stool through the colon, children don’t usually feel the “accidents” happening – rather, they just happen.