The Division’s main purpose, is the scientific empirical investigation of phenomena that suggest currently accepted scientific assumptions and theories about the nature of mind and consciousness, and relationships to physical matter, may be incomplete. 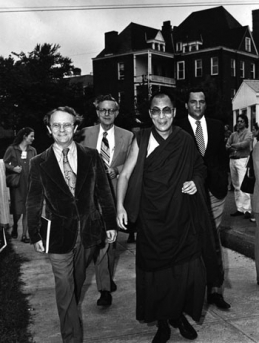 The Division of Perceptual Studies (DOPS) is a research unit of the Psychiatry and Neurobehavorial Sciences of the University of Virginia’s School of Medicine. It was founded in 1967, when Dr. Ian Stevenson resigned as Chairman of the UVA Department of Psychiatry to become Director of the Division and Chester F. Carlson Professor of Psychiatry, positions he served in for the next 35 years. Early in 2002, Dr. Bruce Greyson, who has been a faculty member at DOPS since 1995, formerly the editor of the Journal of Near-Death Studies, took over as director and Carlson Professor of Psychiatry. This allowed Dr. Stevenson to devote more time to writing books and articles about his research into cases of the reincarnation type.

In September of 2014, Dr. Bruce Greyson retired from the DOPS directorship but continues his research and writing about the intriguing study of near-death experiences. In March of 2021, Dr. Greyson published his much anticipated book After: A Doctor Explores What Near-Death Experiences Reveal About Life and Beyond.  The book challenges our everyday ideas about our how minds and our brains interact, and offers key insights on how we can begin to live a more meaningful and fulfilling life.

In 2009, Dr. Greyson co-authored The Handbook of Near-Death Experiences: Thirty Years of Investigation. This book is written by a team of experts who presents the history, recent developments, and controversies in the study of near-death experience.

Dr. Jim Tucker, Bonner-Lowry Associate Professor of Psychiatry and Neurobehavioral Sciences, became the Director of the Division of Perceptual Studies after Dr. Greyson’s retirement. Dr. Tucker has authored two books on his research into the phenomena of children who are remembering previous lives. His book, Return to Life: Extraordinary cases of Children Who Remember Past Lives was published in 2013, and his first book Life Before Life: A Scientific Investigation of Children’s Memories of Previous Lives was published in 2005.

Dr. Tucker now has a fully updated 2-in-1 edition, with a new introduction by the author, combining his bestselling books about children who remember past lives. The new book is titled Before: Children’s Memories of Previous Lives and is scheduled to be released mid April of 2021.

The Division was made possible initially through the endowment of an Eminent Scholars Chair to which Dr. Stevenson was appointed. The Division’s principal benefactor, the late Chester F. Carlson, the inventor of xerography, gave the first and largest contribution of funds for the endowed professorship. At his death in 1968, Mr. Carlson also left the University a bequest for the support of the Division’s work. In 1998 the University received another bequest for the Division from the estate of the late Priscilla Woolfan. These generous bequests helped to fund the two endowed professorships at DOPS, as well as helped to supply much needed funds for the day to day operational costs of the Division. Each year, we must raise funds to support our operating costs and to be able to continue our research at the Division of Perceptual Studies. (See Support Our Research )

Examples of such phenomena, sometimes called paranormal, include various types of extrasensory perception (such as telepathy), apparitions and deathbed visions (sometimes referred to as after-death communications or ADCs), poltergeists, experiences of persons who come close to death and survive (usually called near-death experiences or NDEs), out-of-body experiences (OBEs), and claimed memories of previous lives.

Although members of DOPS staff have at one time or another investigated examples of many types of paranormal phenomena, it is wise to focus our efforts and resources. Therefore, in recent years the primary researchers have concentrated almost exclusively on young children who claim to remember previous lives and on near-death experiences.  In studying such experiences, they have placed particular emphasis on evaluating possible explanations–normal as well as paranormal–for the experiences, by thoroughly investigating experiences reported with detailed questionnaires and (whenever possible) firsthand interviews.

Through a generous donation in 2008, DOPS established a state-of-the-art EEG lab research facility, under the direction of Dr. Edward Kelly (psychologist & neuroscientist) and Dr. Ross Dunseath (electrical engineer).  This facility, known as The Ray Westphal Neuroimaging Laboratory, includes an electromagnetically and acoustically shielded chamber, a high-quality commercial EEG data-acquisition system, and extensive software resources for analysis and modeling of multichannel physiological data. Within the lab setting, the researchers are studying Psycho-physiological Studies of Altered States of Consciousness and Psi with the cooperation of especially gifted psi subjects. The term “psi” as used here denotes various kinds of anomalous interactions, not presently explainable in conventional scientific terms, between human individuals and physical effects in their environments.

In 2016, UVA psychologist Dr. J. Kim Penberthy joined the Division of Perceptual Studies research faculty as the new Chester F. Carlson Professor of Psychiatry and Neurobehavioral Sciences. Dr. Penberthy brings with her extensive research in the area of meditation and mindfulness.  She is especially interested in studying unusual and extraordinary experiences which have been reported by those individuals who may experience altered states as a result of engaging in deep meditation.

Many books and articles have been published based on the Division’s research.  The articles produced by the DOPS researchers can be found in scientific, peer reviewed journals.  The research staff regularly present papers based on their research at scientific meetings and conferences when opportunities arise. Our website includes lists of the books and articles published by the Division’s research staff including links to pdfs of the published papers.