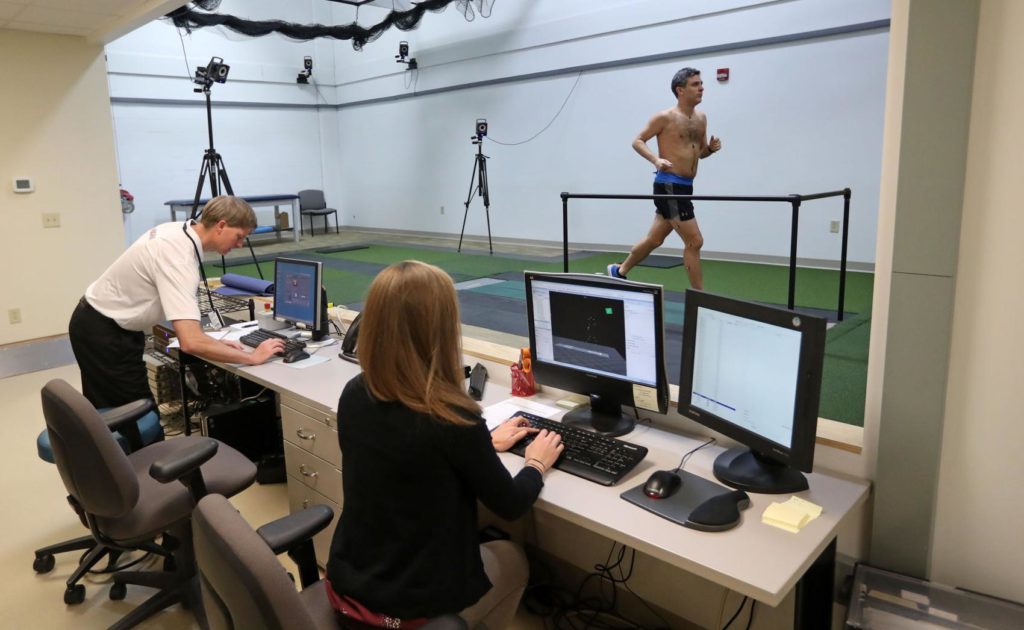 From left, Clinic director Max Prokopy and Biomechanical engineer Jennifer Perry use a treadmill in front of a 3D motion capture system during a recent visit to the UVa SPEED Clinic in Charlottesville. Photos by Andrew Shurtleff

Imagine an $850,000 piece of equipment, one so special that it’s one of only two of its kind in the entire world. Then imagine a guy, who not only has a degree in exercise physiology, but two more in nutrition and biochemistry, operating that machine.

Then picture yourself running, swinging a golf club or tennis racket on that virtually priceless piece of equipment. Now take it a bit further and visualize that guy with the three degrees analyzing every move and step you make and take on that uniquely rare machine, so that every single time you exercise in the future, you do it more efficiently, safely and productively.

Thanks to the ongoing support of Dr. Robert Wilder, an accomplished marathon runner and UVa’s Chair of Physical Medicine, and under the watchful, analytical eyes of Max Prokopy, all of this continues to be a reality right in our backyard.

The UVa SPEED (Strength, Power, Endurance, Education, Durability) Clinic opened its doors in 2002 in the basement of Dr. Wilder’s Runner’s Clinic at UVa’s Department of Physical Medicine in the Fontaine Research Park. 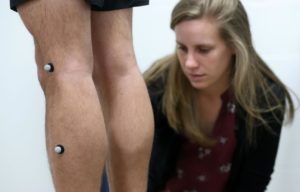 Under the supervision of then-chair Casey Kerrigan and director Jay Dicharry, they set out to dissect every movement an athlete takes and then, thanks to the feedback of no less than 12 infrared cameras that take aim at 17 reflective markers strategically attached to critical moment areas of the athlete’s body, they were then able to analyze an athlete’s every move.

With the aid of this unique machine, they were able to concentrate on improving the biomechanics of chronically injured runners.

Over the years, first with Dicharry and Kerrigan, then Prokopy after he took the helm in 2012, the uses of this special treadmill have greatly expanded. It’s now regularly used to analyze the mechanics of athletes in all kinds of sports, as it continues to focus in on helping to reduce and eliminate the cycle of chronic injuries caused by biomechanical weaknesses.

“When I first watched this, I thought I was witnessing the coolest thing I’d ever seen,” said Prokopy, whose first exposure to the machine came while he was as an intern at the lab as he worked on his exercise physiology masters degree. “The way the machine was able to verify and quantify what we see with our eyes was simply amazing.”

That connecting of the dots to answer the “why” in how an athlete continues to get injured is exactly what appealed to and continues to drive Prokopy each and every time someone steps onto the treadmill.

“Why are they getting injured? Why are they losing performance? Those are the two biggest questions our analysis can provide answers to,” Prokopy said. “About 80 percent of our clients come to us injured. For example, we had a 52-year-old woman who had tried to qualify for [the] Boston [Marathon] 24 different times but kept getting injured with the same ITB [Ilio Tibia Band Syndrome] knee issue. We got her on the treadmill, found the weakness in her mechanics, had her correct them. She then went on to not only qualify for Boston but she just completed her first 100-mile race.”

Recreational runners are the most common people to use the lab, but the variety of different people coming to see Prokopy continues to grow, with tennis players, golfers and baseball players being among the athletes who have now been taking advantage of this amazing service. 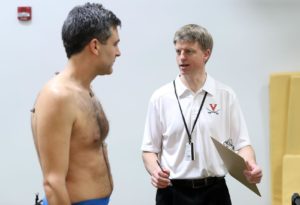 Before competing in the U.S. Olympic Marathon Trials, Ten Miler course record-holder Sean Keveren was having severe side aches. The cramps were so debilitating that Keveren was having a hard time completing his workouts and races.

“Max did a great job of finding the root cause of my cramping, which had everything to do with my arm carriage. He then gave me useful tips on how to correct it, which allowed me to train and compete pain-free again,” Keveren said. “I would highly recommend the lab to anyone, regardless of whether you’re injured or not, as it will greatly improve your mechanics and efficiency.”

Because of the uniqueness of the lab services, many of the clients are coming from afar.

Gina Diorio, a 39-year-old recreational runner from Philadelphia, had not been able to run without ankle and shin pain for more than five years before visiting the lab this past August.

“Max was able to immediately identify and pinpoint where the weaknesses were in my mechanics,” Diorio said. “He then gave me a slew of exercises, which I have been faithfully doing ever since. The improvement has been huge and I’m starting to feel like I did six years ago. It was so totally worth it and the whole experience, from start to the continued follow-up, has gone well beyond my already high expectations.”

“One of the stereotypes we’ve tried to overcome is people thinking they’re not worthy, athletically, to spend the money for the analysis,” Prokopy said. “What we tell everyone is that, through our analysis and them correcting their biomechanical weakness, you can then remain healthy for 30-40 more years. That’s an important investment in the future of their overall health.”

That investment includes not only the filming, data collection and complete and thorough analysis, but also a full musculoskeletal evaluation and a whole array of drill suggestions for fixing things. Plus, a take-home narrative DVD with Prokopy’s summary and follow-up.

With several different pricing tiers, including a $150 deal for the “Run Well” 2D analysis, the experience is looked at by many who use it as an excellent value.

“We have never had a single person tell us, after they’ve finished, that we’re too expensive,” Prokopy said.

The value of this service was recently enhanced when Prokopy and Wilder moved the lab to a much bigger facility behind Northridge off Route 250 West. Not only is the new space triple the size, it’s also brighter and has a spacious outside area for folks to test out their new-found mechanics, and all still under the watchful gaze of Prokopy.