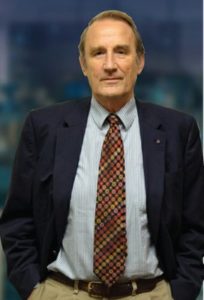 Thomas Platts-Mills is Professor of Medicine and Microbiology at the UVA School of Medicine. The son of a British member of parliament, he was educated at Balliol College, Oxford, and received his medical training at St. Thomas’ Hospital Medical School in London. He earned a PhD from London University and completed a fellowship at Johns Hopkins University under the tutelage of Kimishige Ishizaka. He has been a member of Britain’s Royal College of Physicians since 1971.

Dr. Platts-Mills joined UVA’s faculty in 1982, and has served as chief of the Allergy division since 1993. He has also served a term as president of the American Academy of Allergy, Asthma, and Immunology (AAAAI).

In 2010, Dr. Platts-Mills was elected a Fellow of the Royal Society for his research into the causes of asthma and allergic disease. The Royal Society is the United Kingdom’s national academy of science and the oldest scientific academy in the world. Only a small number of fellows are physicians, and Platts-Mills is the first allergist ever elected. His election was based on more than 30 years of research on the role that dust mite, cat and cockroach allergens play in the development of allergic disease and asthma.