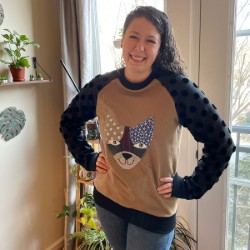 Liz Gonye was awarded an NIH F31, an Individual Predoctoral Fellows Award from the National Heart, Lung, and Blood Institute (NHLBI), which began on September 1st, 2020. Liz is a Department of Pharmacology degree candidate in the lab of Doug Bayliss. She is studying the role of the proton-sensing G protein coupled receptor GPR4 in the regulation of central chemosensitivity in the retrotrapezoid nucleus. This receptor is thought to sense the pH changes in CSF which occur due to CO2 accumulation in the blood and subsequently modulate the activity of RTN neurons to induce altered respiration. Liz is using CRISPR/Cas9 genome editing to introduce pH-desensitizing mutations in mouse GPR4 and studying physiological changes induced in the whole animal or at the cellular level using plethysmography, immunocytochemistry, in situ hybridization, and/or patch clamp electrophysiology. After completing her PhD, Liz looks forward to pursuing a postdoc and hopes to go on to teach/mentor and have a small research lab at a small liberal arts college.