When I was 8 years old, my parents took me and my siblings to Disney World. I can still remember the feeling of unbridled awe I experienced passing through the gates of the amusement park. I had similar feeling as a scientist driving across the bridge into Lindau. This past summer I was one of 29 students from the United States nominated by ORAU to attend the 68th Lindau Nobel Laureate Meeting for Physiology and Medicine. These meetings transform the quaint, Bavarian island-town of Lindau into a scientific wonderland. Located in Southern Germany in the shadow of the Austrian mountains and surrounded by Lake Constance, Lindau’s buildings are painted in vibrant reds, greens, and yellows, and its narrow streets carve seemingly stochastic cuts in and out of the main roads. It takes about five minutes to walk from one end to the other. For one week, the town’s hotels reach capacity with “young scientists” (i.e., those under 35). This year, more than 600 of us came from 84 different countries – our common thread, a passion for biomedical research. The purpose of all the excitement is simply that 39 scientific giants, Nobel Laureates in Physiology and Medicine, had also arrived on the island to meet with and inspire the next generation of scientists.

The days were full of science, the Nobel laureates gave lectures on their past and current research endeavors. The lectures were nothing-short of remarkable. They started with Michael Rosbash and Michael Young – the most recent recipients of the prize for their efforts in deciphering the cellular clock, and ended with a lecture by Ada Yonath, the woman (and now personal hero) who had asked the question of how RNA was translated into protein and went on to describe in elegant simplicity, the ribosome. It continued in a similar way – the discoverer of telomerase and reverse transcriptase, the invention of CryoEM, the creation of recombinant DNA, the role of viruses in the development of certain cancers, key components of the innate and adaptive immune systems – it was difficult to think of a topic of contemporary biomedical research that was not started or revolutionized by this small group of scientists. All this in a single generation of science – I had taken for granted their accomplishments and underappreciated the pace and importance of research. 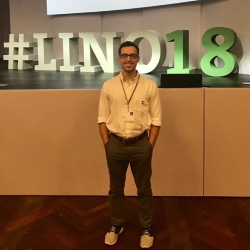 There were many instances where I caught myself questioning the reality of the moment. For instance, I found myself eating dinner with Avram Hershko and his wife, Judith, listening to them recount the discovery of ubiquitin and the proteasome – he is 80 years old and he still does experiments in his lab (his wife claimed that if he doesn’t get to pipet each day he becomes grouchy). Or the time I got lunch with Erwin Neyer and heard about his difficulty getting an adequate seal as he invented the patch-clamp technique that revolutionized the field of electrophysiology. Or sitting across from Michael Levitt and Rainer Blatt as they discussed the possibilities and false starts of quantum computing. Perhaps subtler but no less inspiring were my many interactions with the other young scientists. Indeed, the students – from each country – were exceptional. Biomedical science can rest peacefully in the knowledge that there are young people all across the globe poised to dedicate themselves to her understanding.

It is almost certain that I will never find myself again in Lindau as a scientist – non-Nobel Laureates are only allowed to attend once during their lifetime. But alas it is equally certain that I leave Lindau in awe of those who came before me, inspired by the next generation of scientists, and whole-heartedly committed to playing a small role in advancing this beautiful field forward.