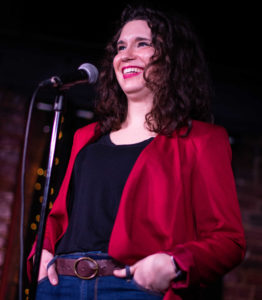 “I think a lot of people think of power as a force, and I think of power a lot through the scope of getting back up and continuing to try our best every day,” said Martinez who received a dyslexia diagnosis during her first semester of college.

As a young engineering student, it was the mentorship of an amazing professor that made the difference.

“No matter how much I studied, I would always fail the quizzes every Friday in the Intro to Circuits and Engineering Class.” Her professor asked her to come to office hours. Expecting to be told she was failing, instead she heard, “You confuse numbers. I think you might be dyslexic.” He noticed that she confused 7s and 9s and flipped consecutive numbers. 14 became 41. He went on to tell her that he regraded all her Friday quizzes based on the numbers she used in the equations. And she scored no less than 90 percent on all of them. “You have all the concepts right,” he said.

Martinez, a Type 1 Diabetic, was already familiar with the challenges posed by living with a disability. With steadfast determination, she visited the disability services office and then discussed her need for accommodations with her instructors.

Currently in her 5th year of her Pharmacology Ph.D., Martinez’s research focuses on the changes that occur in lipid metabolism during periods of chronic inflammatory signaling in Drosophila melanogaster. More specifically, the role of an anabolic metabolic switch that sustains an induction in the unfolded protein response within the endoplasmic reticulum during active Toll signaling. Her goal is to further the field of immunometabolism and to help understand how metabolic diseases can be caused by inflammation.

After graduation, Brittany sees herself as a teacher, mentor, and scientist advocating for graduate students. It’s no wonder she jumped at the chance to share her story with The Story Collider when a producer reached out to her.

“When this opportunity presented itself, I knew I wanted to take it because I think scientists and grad students spend a lot of time with our nose down working. This was the opportunity for me to look up and as a human be appreciated and heard. I was completely terrified though – I had no notes on stage with me, just me and the microphone. But looking back, I wouldn’t change anything about my experience or my story,” said Martinez.