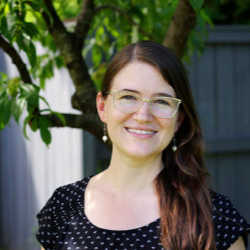 The study of polymers – molecular structures composed of thousands of atoms – may be one of the fastest-growing fields in science today. According to the World Economic Forum, research involving the synthetic versions of these macromolecules could lead to significant advances in health care, technology, transportation and clean energy.

The physical forces that govern polymer structures are extremely complex, and little is known about the mechanisms that control their growth. Kateri DuBay, an assistant professor of chemistry at the University of Virginia, is working to advance our understanding of that complexity.

For her efforts, she was recently named a Cottrell Scholar, an award that recognizes outstanding teacher-scholars for their innovations as researchers and their contributions as academic leaders. She is only the third UVA faculty member to have received the award in its 26-year history.

“Essential biopolymers, such as DNA, are also made up of many sub-units, and those repeat in a particular sequence that is really important because it encodes our genetic information that can be passed down,” she said. “In the cell, there is machinery that makes sure that the sequence is controlled, but in synthetic polymers, we have a much harder time controlling what gets bound together. To actually make that happen in a factory is a really challenging thing, and there’s a lot of effort being aimed at trying to do that very precisely.

“But it’s expensive, and it’s hard to do, and we can’t do it for very long chains.”