Beyond Physicalism: Toward Reconciliation of Science and Spirituality

January 20, 2015 by School of Medicine Webmaster 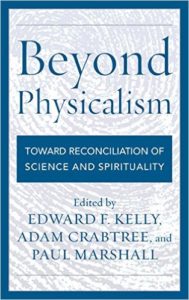 This book is the product of an unusual fellowship of scientists and humanities scholars who dispute the view that reality is purely physical, and that human beings are nothing more than extremely complicated biological machines. In their previous publication, Irreducible Mind, the authors argued that the notion of physicalism cannot accommodate various well-evidenced empirical phenomena including paranormal or psi phenomena, postmortem survival, and mystical experiences. In this new theory oriented companion volume, the authors go further by attempting to understand how the world must be constituted in order that these so-called “rogue” phenomena can occur. Drawing on empirical science, metaphysical philosophy, and the mystical traditions, the authors work toward an improved “big picture” of the general character of reality, one which strongly overlaps territory traditionally occupied by the world’s institutional religions, and which attempts to reconcile science and spirituality by finding a middle path between the polarized fundamentalisms, religious and scientific, that have dominated recent public discourse.

“ 'Beyond Physicalism' heralds an impending shift of epic proportion in humankind’s efforts to understand the nature of reality, and potentially the most significant advance in the recent history of the mind-body debate. This landmark book provides an unprecedented synthesis of science, psychology, philosophy and theology, approaching the deeper truth of all existence.”

—Eben Alexander III, MD, Neurosurgeon and author of 'Proof of Heaven' and 'The Map of Heaven'.

Read the review appearing in Mind and Matter, vol 13 (2), 2015 by Roderick Main of the Centre for Psychoanalytic Studies, University of Essex, UK.

“… 'Irreducible Mind' was the frontal assault against physicalism, and 'Beyond Physicalism' is the flanking movement intended to clinch the battle.”

“There are vibrant developments in key areas of science that show real promise in humankind’s search for, and responsibility to, something higher. There are solid reasons to believe that Havel’s “global revolution in the sphere of human consciousness” may be closer than we think. Among these indicators is the recent publication of 'Beyond Physicalism: Toward Reconciliation of Science and Spirituality'—a dazzling collection of essays by 14 experts in various fields—consciousness research, neuroscience, psychology, physics, history, religion, and philosophy.” From an review titled “Something Higher: Lessons from Beyond Physicalism”