Dr. Claude C. Coleman can be considered the first academic plastic surgeon at the University of Virginia.  He was granted a full time appointment in and established the Division of Plastic Surgery in 1956. He was a high achiever from an early age, finishing his undergraduate degree at UVA in three years and finishing medical school as a member of Alpha Omega Alpha, the medical student honor society, at the Medical College of Virginia in three years as well. He trained in plastic surgery at the Columbia-Presbyterian Medical Center in New York City under Dr. Jerome P. Webster.  After he was recruited to UVA, Dr. Coleman became a leader in reconstruction of the head and neck, and directed the Head and Neck Tumor Clinic while at the University. The Tripartite Committee of the American Medical Association accredited UVA for residency training in plastic surgery in 1959, the fourth program in the southeastern region to gain this distinction. In 1964, Dr. Coleman left the University to return to begin a private practice in Richmond. Since 1992,  Dr. Coleman, Jr. and his father, Claude C. Coleman, Sr. (former chairman and founder of neurological surgery at UVA) are honored through an annual lectureship in craniofacial surgery. The years have seen the best and brightest minds in the field. Visit Charlottesville to share their knowledge. 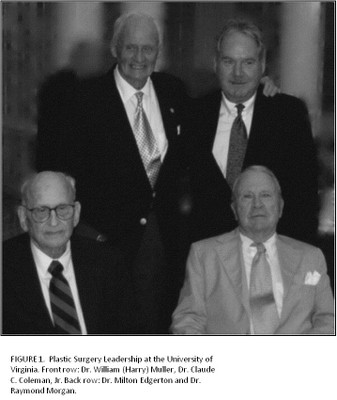 Dr. Milton T. Edgerton, Jr. and Dr. William Harry Muller, Jr. were friends in surgical residency under Dr. Alfred Blalock at The Johns Hopkins University in the late 1940s. In 1970, Dr. Muller (then-chairman of surgery at UVA) helped Dr. Edgerton establish the new department of plastic surgery at Virginia, becoming one of the first independent departments of plastic surgery in the country. Dr. Edgerton left his twenty-three year post as head of the Division of Plastic Surgery at Johns Hopkins to assume the UVA chairmanship. He realized an “enormous advantage” that came with departmental status by being able to “control (his) budget, research expenditures, and salaries.” He used a team approach in providing plastic surgical care, bringing together multiple specialists for the betterment of his patients. His department was unique in that he also had psychiatrists and psychologists on staff. As Dr. Coleman before him, Dr. Edgerton was interested in craniofacial and head and neck tumor surgery. He has provided leadership as a former president of the American Association of Plastic Surgeons and other regional and national organizations. As a founding member of the Plastic Surgery Research Council, Dr. Edgerton always considered research an important pursuit. To emphasize his commitment to research, he hired George Rodeheaver, PhD, in 1972 as the first full time faculty researcher in a plastic surgery department. After thirty-five years, Dr. Rodeheaver continues to be active in wound healing, wound closure, and tissue engineering research. In addition, Dr. Edgerton created a microvascular laboratory that has been active in training plastic surgery, orthopedic, and urologic residents and medical students for more than thirty years. Dr. Edgerton also restructured and revitalized the residency training program, eventually training more than forty residents and fellows. 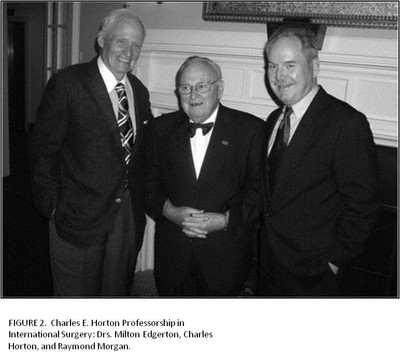 The department currently has four endowed professorships, one of the highest numbers in any department of plastic surgery in the country. One of these professorships is named after another founding member of the Southeastern Society of Plastic and Reconstructive Surgery (SESPRS), Dr. Charles E. Horton. Dr. Horton graduated from the UVA School of Medicine in 1947. He trained at George Washington University Hospital, the US Naval Medical Center, and Duke. Although a leader in plastic surgery training and urological reconstruction, he is best known as the founder and chairman of Physicians for Peace, established in 1984 in Norfolk, Virginia. He spent 20 years organizing medical teams to help developing countries. He always believed in “sustainable projects.” To sustain the memory of his contributions, the Department of Plastic Surgery at UVA established an endowed professorship, the Charles E. Horton Professorship in International Surgery (Figure 2).

The leadership in the past and present have inspired and taught the residents to become leaders themselves. The department has graduated 80 residents and 14 fellows over the past 50 years. Of these, 9 residents have gone on to become chairmen or division chiefs of plastic surgery programs around the country (Table 1).

Table 1. Previous Residents at the University of Virginia Who Have Subsequently Become Chairmen or Division Heads