We have been chronicling women who have pushed the boundaries in the field – and practice of – medicine, and very few have pushed the boundaries as far as today’s physician, an African American woman who became the first African American woman to earn an MD in the United States, and served as a physician before, in the midst of, and after the Civil War, always trying to go where she felt like she was needed most.

Rebecca Lee Crumpler was born in 1831 and challenged prejudice by becoming the first African American female physician in the United States.  Gaining influence from her aunt, who raised her 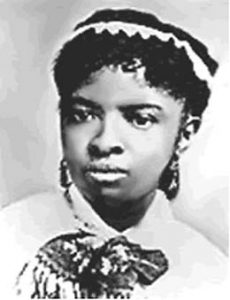 and would consistently help sickly neighbors, Crumpler is noted as stating,

I early conceived a liking for, and sought every opportunity to relieve the sufferings of others.

By 1852, she moved to Charleston, Massachusetts and worked as a nurse for the following eight years. Nursing schools were not established at this time so she was able to perform the work without formal training. Accepted into the New England Female Medical College, and graduating in 1864, Crumpler became the first African American woman to earn an MD in the United States.

Dr. Crumpler practiced in Boston before moving to Richmond, Virginia where she felt she could practice ‘real missionary work’. Post-Civil War, she had large access to impoverished families and joined other black physicians in caring for freed slaved while at the same time combating widespread racism that still inhabited the South.

What little we know about Rebecca Lee Crumpler MD is due to her “Book of Medical Discourses” published in 1883. This book recounts her experiences as a physician and marks her achievements and milestones. With this publication she also became one of the very first African Americans to print a medical work.