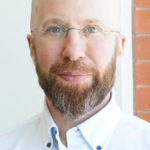 Abstract: The Campbell research group is focused on the use of protein engineering for the development of fluorescent protein-based biosensors for imaging of cell signalling and metabolism. Protein engineering, using a combination of rational protein design and directed protein evolution, is the most effective and versatile approach for generating new genetically encoded fluorescent biosensors. By exploiting structure-guided design, iterative cycles of high-throughput fluorescence image-based screening of bacterial colonies, and lower throughput testing of promising variants in mammalian cells, we are developing a growing selection of fluorescent protein-based biosensors with improved properties. In this seminar I will present some of our most recent efforts to engineer an improved generation of biosensors. Specifically, I will provide an update on the expanding palette of calcium ion biosensors, and describe how we are using similar engineering efforts to make biosensors for neurotransmitters, ions, and key metabolites.