Rachel Day saw something during a scan that didn’t look quite right. She asked the doctor to look at the scan early, and the doctor found a major problem. Because of Rachel’s initiative, she prevented an issue from becoming extremely serious. 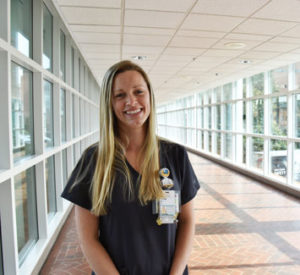 Rachel looked at the image and saw something that didn’t look quite right. The patient in the scanner was having a follow-up scan after surgery. It was a routine scan; no one expected anything to be wrong. Rachel battled indecision for a moment and then made a call to the doctor. “I think you need to take a look at this,” she said.

As a CT technologist, Rachel doesn’t usually make calls about what she sees on her screen. Her job is to get the clearest images possible and give them to the right doctor. The doctor then reads the scan in the order of their urgency. For example, he reads an emergency room scan before a routine post-surgery check-up scan. So it was unusual that Rachel asked him to take an early look.

Working as a Team

The doctor looked at the image and confirmed Rachel’s fear: The patient was bleeding internally.

The doctor made a quick phone call and the patient went immediately to Interventional Radiology (IR) where the doctors there performed a minimally-invasive procedure. Thanks to Rachel, the doctors caught this problem before it became much worse.  “The issue would have been eventually caught later,” said Rachel. “But because it went through a lot quicker, the patient was able to have surgery within the hour.”

Rachel’s experience and sharp eye made her think twice about dismissing something that looked off. “I think it was more of a big deal than normal because it was something that wasn’t expected,” she said. Thankfully, Rachel wasn’t afraid to speak up, and the doctor welcomed her input. “Our doctors are really open to listening to us,” said Rachel. This teamwork gave the care this patient needed in the fastest way possible.

Rachel Day works as a CT Technologist at UVA Radiology and Medical Imaging. She helps set up and clean up for procedures, facilitates CT scans for patients, and communicates with the doctors about what they need from the imaging. In her department, she is known as “the hiker” and her coworkers often seek her advice about the best times and places to go hiking in the nearby mountains. She loves trying new things and thinks Charlottesville is the perfect place for exploring.