As he reclaimed his health, Mike Green began to pursue other dreams as well. Today he works as an Ultrasound Technologist for UVA. 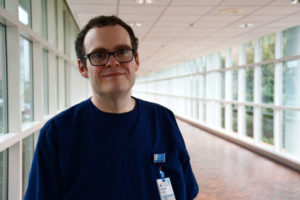 Mike Green knew something had to change. “My health was awful and I knew it,” he said. He was in his thirties and weighed almost 500 pounds. “I had a moment when I got scared and it made me start researching what I needed to be doing.”

Over time, Mike had felt his health slipping away bit by bit. His biggest concern was that he was diabetic and needed to address his high blood sugar levels. So in 2009, he decided to do something about it. He began by removing sugar and most carbohydrates from his diet. His blood sugars began to stabilize and, as a side effect, the weight started coming off, and he lost nearly 280 pounds. “Seeing the physical manifestation of my efforts was encouraging to me. It snowballed my progress and made it easier over time,” Mike said. He’s maintained this dietary lifestyle ever since.

When he made these lifestyle changes (along with adding exercise!), Mike’s diabetes eventually disappeared. After a checkup, his doctor commented, “Your health is excellent!” All his markers for diabetes were normal. His blood pressure and blood work were fantastic. Everything looked good. “It was like I hit the lottery in how I approached my health. With the changes I made, everything just fell into place,” said Mike.

With his health turned around, Mike didn’t let his success stop there. In 2013 he decided to go back to school. Right after high school, he had jumped straight into the workforce, believing that, as time went on, he had little chance of pursuing higher education. Yet he had gained the confidence he needed to move ahead.

At first, he wanted to study to become an X-ray technologist. “It’s what my sister was doing, and she really likes what she does,” Mike said. But because of his interest in math and physics, his professors encouraged him to study ultrasound.

A passion for UVA Radiology

Mike went through a clinical rotation at UVA while studying at Piedmont Community College. What he saw here made him want to stay. “It was like my education was starting all over again because I was seeing things at UVA on a daily basis that I may have seen once at another facility – or not at all,” he said. When he graduated in 2015, he came straight to work at UVA. Mike has now been working as an ultrasound technologist for a year-and-a-half.

I know how you feel

Mike’s own experiences with his health has enabled him to view others in similar situations with more empathy. “Obese individuals are generally the hardest people to scan. But I know what it’s like to be there, so I feel a lot of compassion for people in that situation. I know it’s frustrating,” he explained. “It took me into my thirties to figure out how I could not just lose weight but keep it off long-term. So I think it’s made me more compassionate; it gives me some insight a lot of people will never have.”

March 28th is Diabetes Alert Day. To calculate your risk, spend two minutes taking the Diabetes Risk Test. Talk to your doctor and take charge of your own health today!