Imaging the ‘Hoos: A Look Inside the Partnership Between UVA Radiology and Athletics 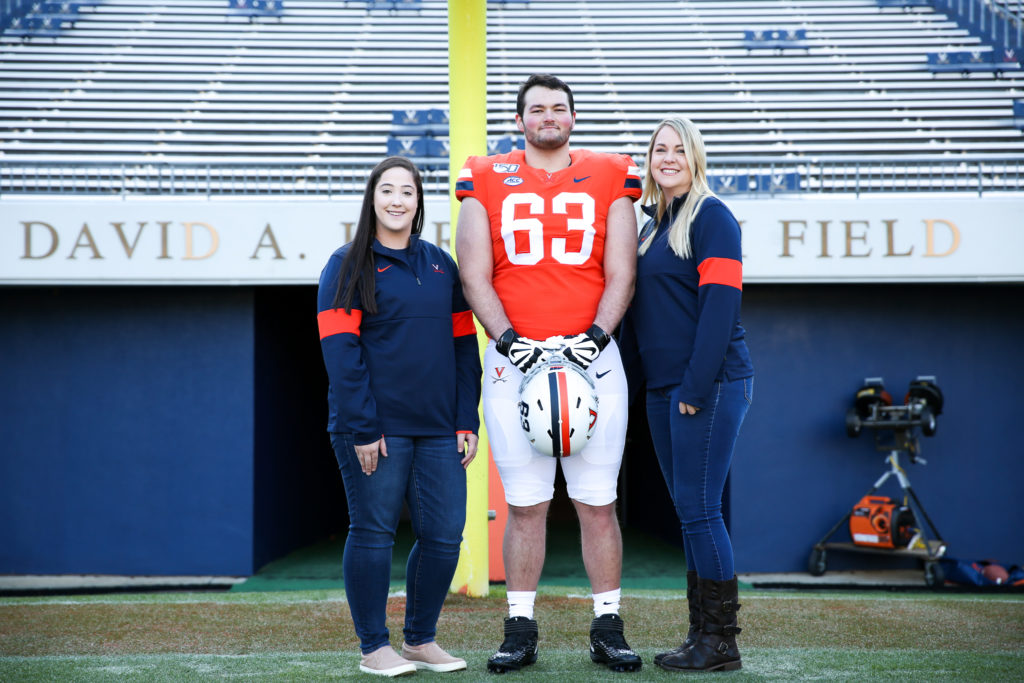 When Cavalier fans flood into Scott Stadium on Friday night for the season-ending game against rival Virginia Tech, they’ll be met with an array of brilliant sights and sounds: the glow of the scoreboards; the roar of the crowd as the cavalier on horseback leads the team onto the field; the brassy exclamations of the marching band.

But deep inside the stadium, near the Virginia locker room, lies a small room with a purpose and equipment that most fans will never see. And if you zoomed in on the stands near the door where the ‘Hoos enter the field, you would see two people sitting together and cheering, seemingly indistinguishable from thousands of other UVA fans. But these two people aren’t just at the stadium to cheer on their team: they have work to do. They play a major role in keeping Cavalier and visiting players safe whenever there’s a suspected injury on or off the field.

Samantha Shoemaker and Taylor Burton are diagnostic radiologic technologists in the UVA Department of Radiology and Medical Imaging. As technologists, Samantha and Taylor are responsible for operating x-ray machines in the hospital’s operating rooms. They make sure that patients are positioned correctly for imaging the part of the body that needs to be examined, and they operate the machine to take the required images as accurately as possible. Later, radiologists will look at the images Samantha and Taylor take and determine what is happening  inside the patient’s body.

At each home football game, Samantha and Taylor are on hand to take x-rays of any and all players who might have sustained an injury, whether a Cavalier or a visiting team player. To do this, they use a portable x-ray unit that lives in that small room deep inside Scott Stadium.

This is Samantha’s seventh season as an x-ray technologist at Scott Stadium, and Taylor’s third. By now, they’ve become  an integral part of the team that keeps UVA football players healthy and safe.

Samantha and Taylor’s day at the stadium begins at least an hour before kickoff, when they arrive and make sure that the x-ray machine is operating properly. Once the game starts, they either wait in the x-ray room inside the stadium, or they sit in special seats close to the field and the entrance to the locker rooms. They can’t leave during play, because they have to be ready to spring into action and x-ray a player at any moment. 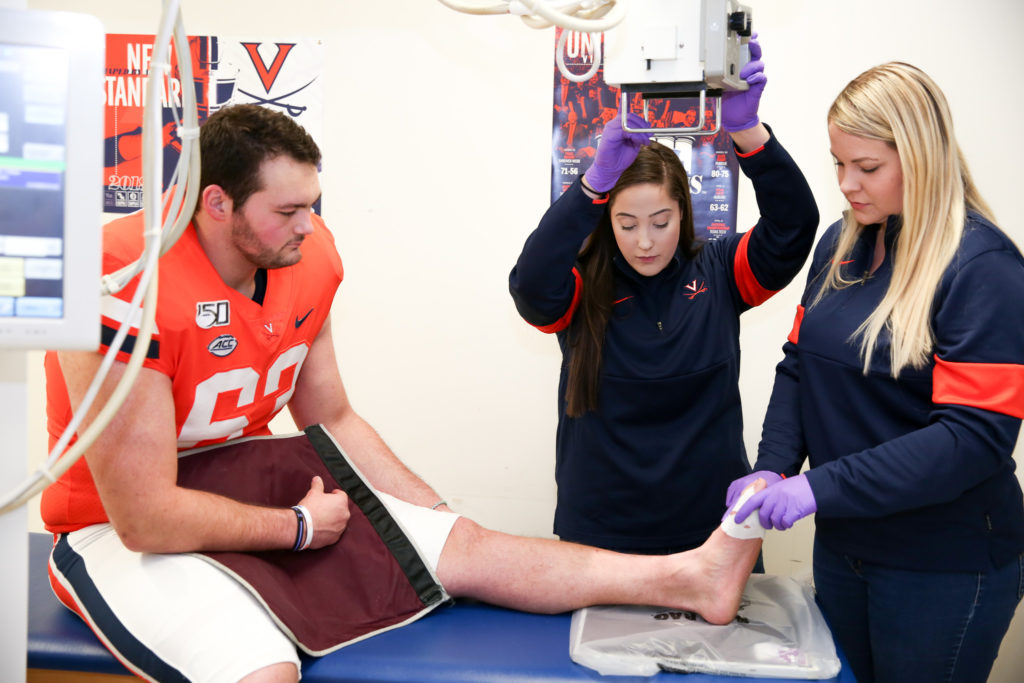 An Injury on the Field – What Happens Next?

When a player gets injured on the field, the crowd quiets and waits as team trainers and staff rush out to take a look. After a few moments, the player might be able to walk off the field and head into the locker room. The crowd cheers when they stand up, and watches them disappear through the doorway into the stadium. But once the player out of sight, fans turn their attention back to the players and the game on the field.

This moment is when Samantha and Taylor get to work. And it happens at almost every home game. “We usually take multiple sets of x-rays per game,” Samantha says. “It’s rare to get through a game without taking any images.”

Samatha and Taylor ready the x-ray scanner and wait for the athlete to arrive in the x-ray room, usually accompanied by a team doctor and an athletic trainer. The technologists guide the player through the x-ray process, make sure they are positioned correctly, and take the images needed. And how do the athletes handle these stressful moments when they’re waiting to hear news about a possible injury? “Understandably, they’re usually pretty anxious to hear results,” Samantha says.

The Partnership Between UVA Radiology and Athletics

UVA Radiology and Medical Imaging has been providing this imaging service to UVA Athletics for home football games for the past 10 years. Before this partnership, football players had to be transported to the hospital by ambulance if they had a suspected injury. That had obvious drawbacks: if the player hadn’t sustained injuries, it was too late for them to get back to the game once they had made it all the way to the hospital. And if an injury was serious, it meant that care to the player was that much more delayed.

But with modern technology, the images Samantha and Taylor take in the stadium are immediately visible to the team doctors and sent digitally to the hospital. If team doctors have questions, radiologists back at the hospital can produce a report quickly that addresses concerns in more detail. They can even talk on the phone about what UVA radiologists see on the x-rays.

The advantage to the players and the team are obvious: everyone knows right away if a player is hurt and to what degree. The doctors can rule out harm or serious injury quickly, but they can also pinpoint if something has happened that requires immediate medical attention. It all means that the health and safety of the players is front and center and that their care is managed at the highest level. 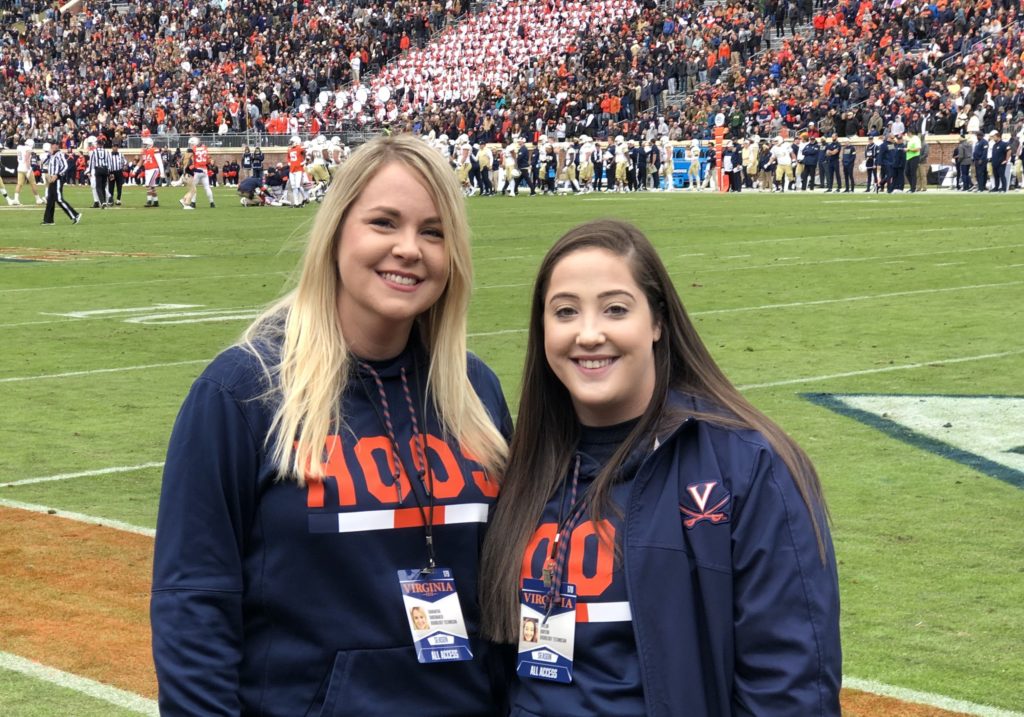 A Labor of Love

After x-rays of an injured player are taken and examined by team doctors, Samantha and Taylor can settle back into their seats, ready once again to spring into action if needed. But for now, they can cheer on their ‘Hoos with every yard, possession, and touchdown.

Samantha and Taylor are both huge Virginia sports fans. They’re such big fans, in fact, that their time at the stadium spent imaging players is volunteered – they aren’t paid to be there. They choose to use their technical skills because they love Virginia sports and they have a desire to contribute to the team and the community that surrounds it. “This is a way for me to combine my passion for sports, my job, and volunteering my time to be part of something bigger,” Samantha says. “It feels empowering to be involved in the care of our athletes and part of the team that gets them back on the field.”

Taylor agrees. “I’m a big UVA fan and have always attended games, so when I first became a technologist (at UVA), I thought it was a great opportunity to support the team while being able to utilize my skill set. It feels like a privilege to be able to give back to the team and the community.”

Asked for her favorite memory from the last seven seasons, Samantha, ever the ‘Hoos fan, says, “The time we beat the Hokies at home in 2019 – hopefully!”