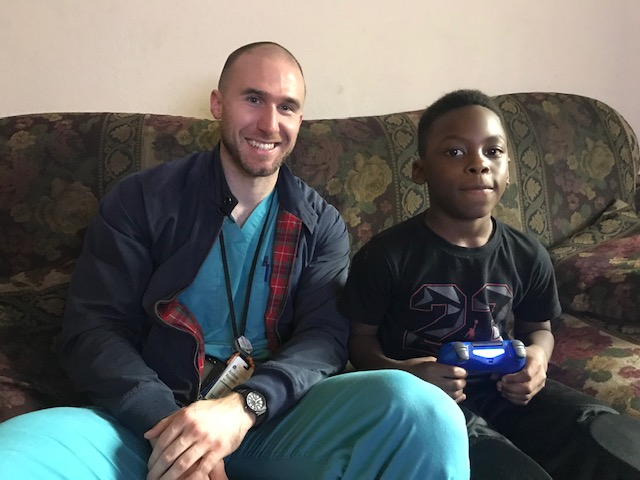 Residency is usually a demanding time for doctors. Besides training at an increasingly complex and detailed level in their chosen specialty, residents are also taking on more responsibility and independence as clinicians. The long hours and extensive training make it a challenging and incredibly important time in a physicians training.

For one UVA Radiology resident, giving back to others has brought balance and purpose to his residency experience. 3rd year diagnostic resident Andrew Renaldo is a big brother with Big Brothers Big Sisters of the Central Blue Ridge. We talked briefly with Andrew about his experience as a big brother.

When did you become a big brother?

I started in September 2019. It’s through Big Brothers Big Sisters of the Central Blue Ridge and it’s the first time I’ve been a big brother.

Why did you decide to become a big brother while in your residency program?

In my fourth year of medical school, I read a book entitled The Other Wes Moore that recounted the lives of two teens, coincidentally with the same name, growing up in Baltimore in the 1990s. Though they came from similar backgrounds and faced similar challenges, their life paths diverged greatly as a result of differences in community support and opportunities afforded them during their formative years. The book resonated with me and, along with a desire to engage with the Charlottesville community following the tragedy of 2017, led me to become a big brother.

Tell us about your little brother.

My little brother’s name is Syrreal and he’s 11 years old. Syrreal is an amazing little brother and always makes me laugh. I wish everyone could see his spot-on NBA player impressions.

What do you like best about being a big brother?

During residency, when it’s natural to focus on the increasing responsibilities that come with each new year of training, spending time with Syrreal has helped me rediscover the joys of being a kid.