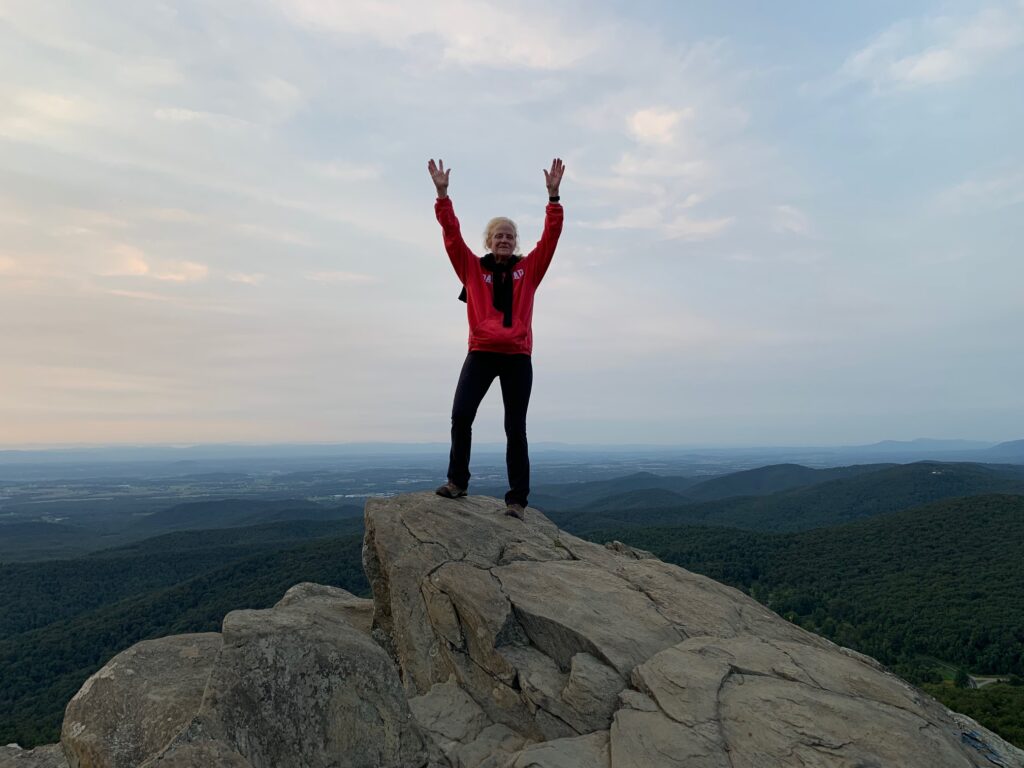 In September 2020, Martha Taylor, a Radiology nurse, retired after 34 years at UVA Health. Before spending 14 years in the RADU, Martha was a nurse in the neonatal ICU for 17 years.

In the RADU, Martha had a first-hand look at biopsies and procedures performed by radiologists. Her many years of sedating patients and being present during these procedures, side by side with technologists operating the imaging equipment, gave her immense appreciation for the care that the entire Radiology team provides to its patients.

“Radiology really is exceptional group of people in every phase – the techs, the nurses and the doctors. It’s an incredible group and an incredible quality of imaging comes out of the collaboration between these people.”

As Martha moves into the next phase of her life, she wanted to share her unique perspective and observations as a Radiology nurse with the rest of the department. And don’t worry – you’ll still see Martha in the department! A new Radiology volunteer position was approved by the UVA Health Volunteer Services, so Martha will be coming back to the Radiology as a volunteer in the months ahead.

#1: Radiology is the Foundation of Care

“Radiology deserves more recognition for creating the platform that enables exceptional care. Everything that happens to a patient that comes into the medical center is based on the images that are taken of them,” Martha says. “You rarely hear it acknowledged that the foundation of care at UVA is built upon the work done by Radiology and Medical Imaging. Our department creates the map that is used to treat patients.”

“And interpretation of imaging is very much a subjective practice. Two different hospitals or two different radiologists do at times report different findings. That’s why it’s so important to have the most experienced and specialized people reading an image. That’s also why we have teams reading imaging, because the variance in opinion is worked out as the radiologists share their viewpoints. They may initially differ in opinion but usually arrive at a consensus in the final report.”

Martha continues: “I worked with people from other hospitals and other areas of the country. Very frequently, they would say,’ ‘we didn’t take this extra step,’ or ‘we didn’t factor that in at my hospital.’ It gave me awareness of how our department is set up so that small details are included in the protocols for each individual study.”

“It’s not just that we develop protocols that are best for a particular part of the body or disease process. We further individualize it for each patient, and it results in our images being better than other hospitals. We are also aggressive about minimizing the amount of radiation for every patient.”

“Part of minimizing radiation is taking the best quality images the first time. The situation I would often see is people coming to UVA Health because something wasn’t clear at another hospital. I’m always telling people they should come to UVA for imaging – I say, don’t bring your images with you, but actually have them done here at UVA.”

#3: Quiet Acts That Save Lives

“This one is the hardest to communicate, but it also has the most dramatic effect. In my fourteen years of working in RADU,  I saw many patients come to UVA to have a biopsy done that another hospital said they either couldn’t do or that it wasn’t safe to do. But I never once saw a patient have a bad outcome in this situation. Either the UVA radiologist felt that it was safe to proceed and was successful, or our radiologist drew the same conclusion as the other hospital that it was not safe to proceed.”

“I have been in the room so many times when our radiologists are making slow, incremental moves during a biopsy, looking at things with such a sophisticated eye. We all know how important the biopsy is for the patient, and we see how careful the radiologist is being, trying to avoid the aorta, for example, or the bowel. I remember watching Dr. Juan Olazagasti once, and the technologist and I were thinking – ‘is he going to back away, or is he going to move forward?’ And he moved forward and was able to get into a lesion and get a tissue sample and in that moment, I thought, this is such a moment of brilliance, but the tech and I are the only two people who’ve seen it!”

“At the Olympics, when a figure skater does triple lutz or something else that no one else has done, everyone gets to see what makes that person so brilliant. But in radiology, these moments of brilliance in the procedure room are only witnessed by the nurse and the tech. I don’t know exactly how to communicate the skill set our doctors have to have – confidence? bravery? – to go that extra half millimeter, say, and get a tissue sample. When I was present in the room at those moments, I wished that this patient’s family could be there to see this instead of me. Seeing those acts of heroism, being there to witness them, was a very special aspect of my job.” 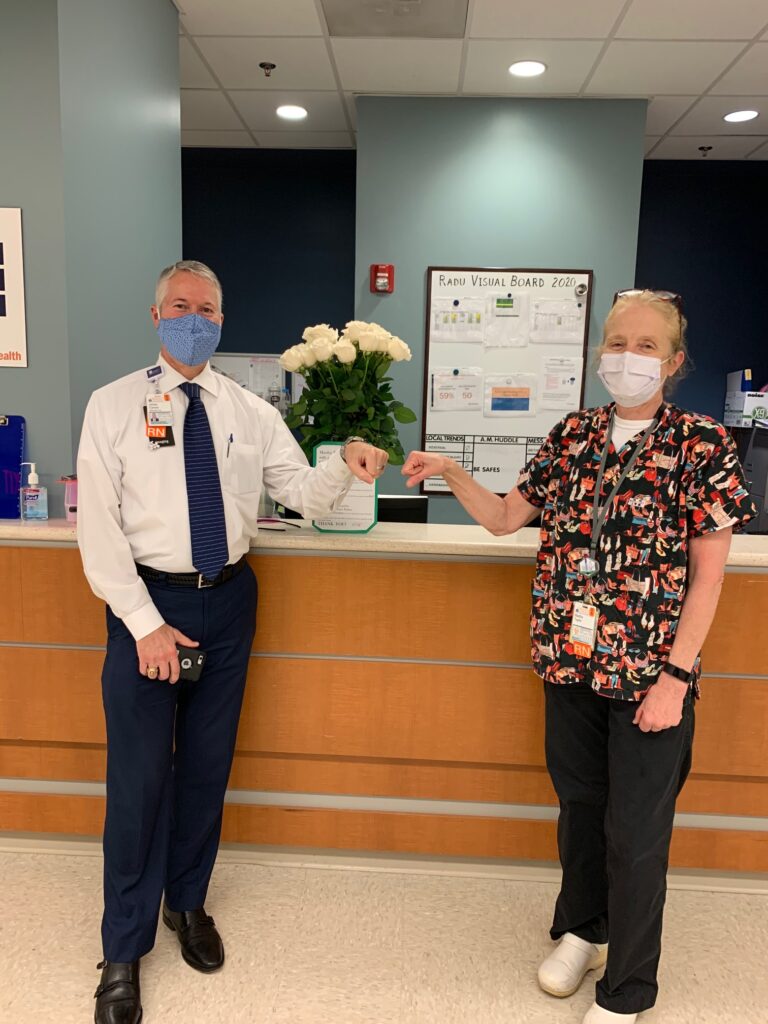 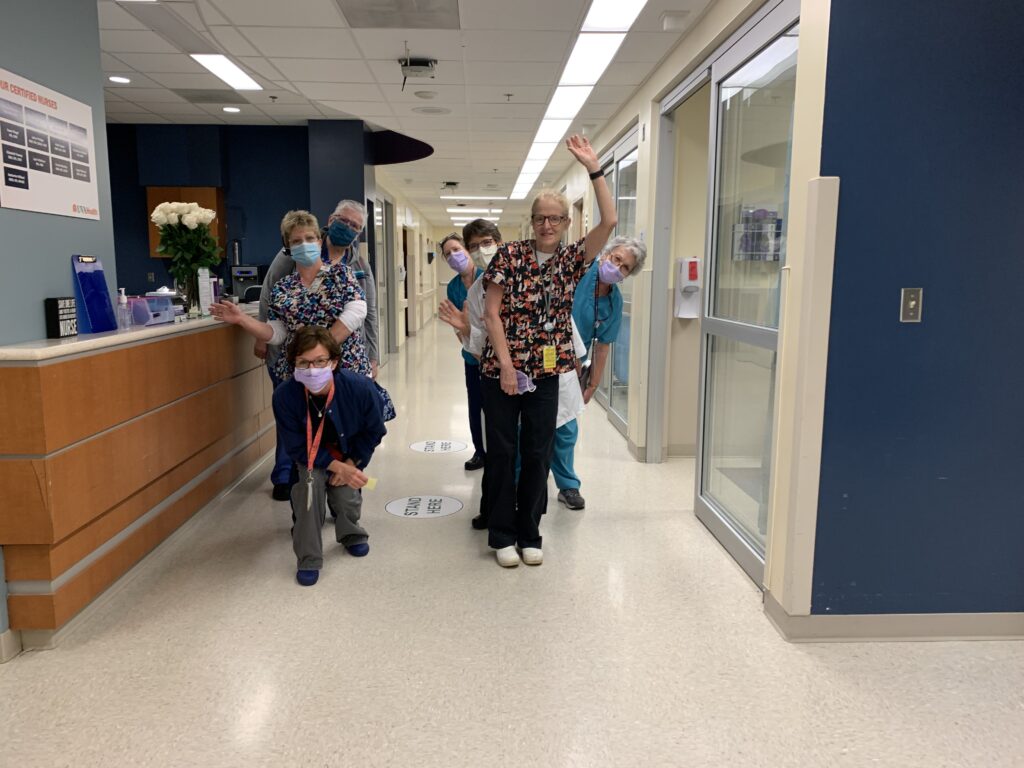 Martha poses with her Radiology colleagues