On June 19th, a group from the Bioethics center- including our fellow and new interns-  traveled to Washington DC to attend a conference hosted by Gallup and Wellcome. There, presenters discussed their initial findings in a global survey regarding attitudes surrounding science, health and technology. This survey asked over 140,000 people around the world a series of questions in an attempt to better map topics such as global understanding and interest in science and health, trust in science and health professions, science and society, and attitudes to vaccines. Although there is still much analysis to do on this vast data set, here are some conclusions of note: generally men are more likely to claim greater scientific knowledge than women, especially in northern Europe. Average income levels in countries do not seem to affect confidence in hospitals or health care clinics. However, individual income levels do have a significant effect, as those who are “finding it difficult to get by” are less likely to say that scientific advancement benefits society. Finally, 92% of parents worldwide said their children had received vaccinations.

These findings, and many more, were discussed in this conference through a paneled discussion, as well as a question and answer session. Experts in their field contemplated questions about the prospect of mandatory vaccinations, the need for better health education, the interconnectedness of government, military, and science, and who is encouraged and allowed to participate in science. For access to the full report, please visit Wellcome.ac.uk/monitor 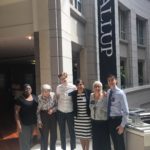