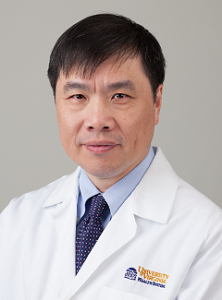 Zhenqi Liu is the James M. Moss Professor of Diabetes and Professor of Medicine at the UVA School of Medicine; he has served as chief of the Division of Endocrinology and Metabolism since 2012.Dr. Liu earned his medical degree at Hunan Medical University in Changsha, Hunan Province, China, and came to the U.S. in 1990 for postdoctoral research training, first at Yale and then at the University of Virginia. After completing a residency in internal medicine at Washington Hospital Center in Washington, D.C., he received clinical fellowship training in endocrinology and metabolism at UVA. Eugene J. Barrett, PhD, MD, former president of the American Diabetes Association, was an early mentor and collaborator at UVA. Dr. Liu joined the University faculty in 2000, after receiving an NIH career development (K23) award.

Dr. Liu studies insulin action in the vasculature and muscle, energy metabolism, incretin regulation of insulin action, and the cardiovascular complications of diabetes. He has received numerous research awards from both the NIH and the American Diabetes Association.

Dr. Liu and his wife Meiping have been married for 32 years, and have two children: daughter Jia is a physician and son Kevin is a software developer. Both went to UVA for their undergraduate studies. Dr. Liu enjoys hiking and playing golf in his spare time.

My work, in both the research and clinical realms, involves solving puzzles. In high school, figuring out algebra equations brought me enormous satisfaction; ‘algebra’ is derived from the Arabic ‘al-jebr,’ meaning ‘reunion of broken parts.’ Endocrinology, to me, is the algebra of physiology and biochemistry: patients with endocrine problems have broken physiologic and biochemical parts. I remain hopeful that someday I might solve a major ‘algebra’ problem in endocrinology.