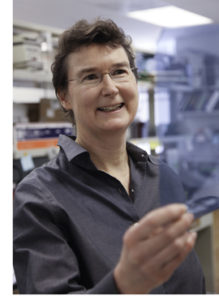 The research in my laboratory focuses on insulin signaling and the regulation of the trafficking of membrane proteins, specifically the glucose transporter GLUT4 and the insulin-regulated aminopeptidase IRAP, predominantly in adipocytes and skeletal muscles. Furthermore, we are interested in how insulin, through its action on the trafficking of GLUT4 and IRAP, affects cell function and whole body physiology.

The proper control of the subcellular distribution of GLUT4 in muscle and fat cells is key to the maintenance of glucose homeostasis. Under fasting conditions GLUT4 localizes mostly to intracellular vesicles (GLUT4 vesicles) and only a low amount of GLUT4 is at the cell surface. This limits glucose uptake into muscle and fat cells thereby allowing the circulating glucose to be used as fuel by the brain. After food intake, when glucose levels rise, insulin is released into the circulation and stimulates, within minutes, the movement to, docking and fusion of GLUT4 vesicles with the plasma membrane. The resulting increase of GLUT4 at the cell surface leads to increased glucose uptake into muscle and fat cells, thereby normalizing circulating glucose levels after a meal. The molecular mechanism by which GLUT4 is retained within fat and muscle cells in vivo in primary adipocytes and muscles under fasting conditions, and by which insulin releases GLUT4 to the cell surface, has not been established. However, studies in cultured fat and muscle cells attributed roles in GLUT4 retention and release to the Rab GTPase activating proteins (Rab GAPs) AS160 and Tbc1d1. With our current research we are investigating the roles of AS160 and Tbc1d1 in the regulation of the subcellular distribution of GLUT4 and thus glucose uptake in primary adipocytes and skeletal muscles and whole body glucose homeostasis using knockout mice. Our research has direct implications for major diseases, including obesity, the metabolic syndrome, and diabetes. In each of these, glucose homeostasis is impaired concomitant with dysregulation of the trafficking of GLUT4.

My past research has focused on the regulation of the trafficking of IRAP and its physiological role. IRAP is regulated like GLUT4; it is efficiently sequestered within the same intracellular compartments as GLUT4 under basal conditions and relocates to the cell surface of muscle and fat cells in response to insulin. With regard to IRAP’s physiological function, we have discovered that IRAP is responsible for the cleavage of circulating vasopressin and that insulin can accelerate extracellular vasopressin cleavage by relocating IRAP to the cell surface. The physiological significance of this finding will be further elucidated in future research.