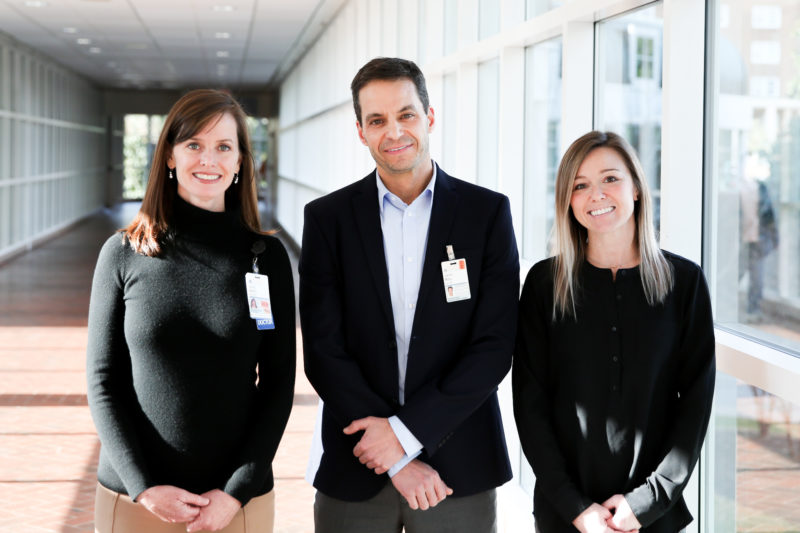 Dr. Jaime Mata, Associate Professor of Radiology and Medical Imaging at the University of Virginia, was recently awarded a grant from the Focused Ultrasound Foundation for research on MRI-guided Focused Ultrasound (MRgFUS) as a new, incision-free, radiation-free treatment option for lung cancer.

As a faculty member in the Research Division of the UVA Department of Radiology, Dr. Mata’s work primarily concerns developing new MRI techniques, as well as methods for imaging lungs using hyperpolarized gases. Because UVA is home to the first-ever Focused Ultrasound Center of Excellence, as designated by the Focused Ultrasound Foundation, he has also done extensive work with focused ultrasound.

What is Focused Ultrasound?

Focused ultrasound is a new and rapidly expanding technology that can target and destroy tissue deep inside of a patient’s body without traditional surgery or incisions. It uses a single or multiple ultrasonic sound waves on a target inside the body with extreme precision and accuracy. Each one of these sound waves is harmless – but in the small area where they are all focused and concentrated, their combined energy generates enough heat to actually destroy tumors.

At UVA, focused ultrasound is already being used to target the brain tissue responsible for causing essential tremors, as well as to treat uterine fibroids.

“Twenty years from now, this will be the future of surgery,” Dr. Mata says, “Besides being an incision-free and radiation-free, the risk of infection compared with traditional surgical methods is very small. And in most cases (focused ultrasound) requires only a single night in the hospital for observation. In the future, some procedures can be done as an outpatient and the patient will be able to immediately go about their normal life.”

Focused Ultrasound and the Lungs

With his longstanding focus on lung imaging and lung cancer, as well as focused ultrasound, Dr. Mata was excited by the idea of combining his research interests in one project. As he says, “We have this great technology – focused ultrasound – now, how can we use it to treat lung cancer?” To do so, he had to devise a way to work around a longstanding and fundamental issue: ultrasound waves can’t travel in air. They require a fluid medium to pass through, which makes it easy to target tissue in the brain, liver, or kidneys, for example. But penetrating the air-filled lungs represents an entirely different challenge.

Lungs are highly complex and delicate organs. Suspended inside the chest cavity on a network of elastic fibers, they are full of tiny passageways for air to travel through. These passageways terminate in small sacs called alveoli, which is where oxygen is transferred into the bloodstream through blood vessels called capillaries. The entire network of passageways and capillaries is exquisitely complex and detailed, but also surprisingly vast: it’s estimated that the surface area of the millions of tiny alveoli in the lungs is enough the cover an area the size of a tennis court. And as the only organs that are constantly exposed to the outside environment, lungs are especially susceptible to environmental hazards like smoking or the inhalation of dangerous chemicals.

On a previous grant from the Department of Defense, Dr. Mata had developed a method of targeting and removing mesothelioma using MRgFUS, specifically tumors that had grown on the chest cavity and into the wall of the lung. These tumors rub against the lungs and create a lot of fluid in the thoracic cavity surrounding the lungs. Patients with mesothelioma require periodic removal of this fluid with a needle and syringe, which is a relatively quick and simple procedure.

It was a lightbulb moment: Dr. Mata could collapse a single lung and flood the thoracic cavity around the lung with saline, and then simply use a syringe to remove the liquid when the focused ultrasound was finished. The advantage of this approach was simplicity – “Usually, the things that are simple have a higher probability of working,” he says.

Dr. Mata reached out to Dr. Linda Martin, a thoracic surgeon at UVA, to collaborate on the study because of her expertise with thoracic surgery and her extensive experience with lung and esophageal diseases. Working with Dr. Martin, Dr. Mata devised a procedure that involves collapsing one lung at a time and filling the cavity surrounding that lung with saline. With the lung empty and surrounded by liquid, the waves of the focused ultrasound could reach the tumor inside of the lung. After the tumor is destroyed, Dr. Mata could simply drain the saline out of the chest cavity and re-inflate the lung.

The entire procedure could be repeated for the other lung, and can also be repeated multiple times on each lung if there are many tumors or if the tumors are especially large. And with no incisions and reduced chance of infection, recovery time is minimal: the patients will require just one night in the hospital for monitoring purposes.

A Potential for Real and Lasting Good

Lung cancer is the number one cause of cancer-related deaths in the United States. Worldwide, over 1.5 million people die from the disease each year.

The current treatment options for lung cancer are both limited and physically grueling. Surgical removal of a lobe, section of a lung, or even an entire lung, is the best option in patients with early stage disease, but many people, especially elderly patients, aren’t healthy enough to be good candidates for this major surgery. Even in healthy patients, recovery can take months.

Focused ultrasound could offer a safe, non-traditional surgical alternative to the thousands of patients with lung cancer who could not survive a lung resection. Dr. Mata’s research is a first step towards the goal of making this treatment available to patients around the world. Specialized transducers that can focus the ultrasound beams better on the lungs may need to be developed, and further studies will have to be done to refine the procedure and bring about FDA approval.

“I think we have a good probability of making this work,” Dr. Mata says. “This study will help us see exactly what we need to do to make (the procedure) efficient and work really well. If this technique proves to be useful, it could treat hundreds of thousands of people throughout the country and the world.”