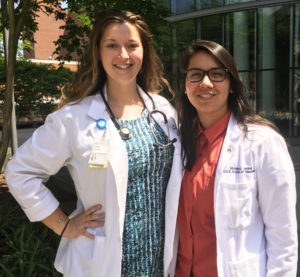 Since the year 2002, DOPS has engaged 2 first year UVA medical student summer research interns in coding cases of children who report memories of previous lives. The medical students apply and are interviewed for this summer research program. They are here for 7-8 weeks during their break from their first and second year of medical school.  The students are supervised and trained in the coding procedures in a standardized manner. They are then given access to the files and field notes of the cases of children who remember previous lives. Using standardized procedures, they code the cases for over 200 variables. Once a case is coded, the data is entered into a large SPSS data base. The medical students are then encouraged to create a research project of their own in which they use statistical analysis to look for patterns and and trends in the data. At the end of the summer, the medical students typically give a presentation about their project to the faculty and write a short summary paper. It is possible for these medical student projects to evolve into published academic papers with the guidance and collaboration of the research faculty.

Cases of the Reincarnation Type with Memories from the Intermission Between Lives, by Poonam Sharma and Dr. Jim B. Tucker, published in 2005 in the Journal of Near-death Studies, 23(2):101-118.   This project analyzed statements from 35 Burmese subjects, revealing patterns in the memories that they described.  A comparison of these reports, to reports of near-death experiences indicates significant areas of overlap between these two types of experiences. (pdf)

We invite you to review the descriptions of the ways in which the DOPS researchers currently envision expanding their research within special areas of focus.

Please click here on “Expanding Our Research” for more information.

*Please note, we do not provide course credit or funding to any students, graduate students or medical students for these specially arranged circumstances.

Residents from UVA Medical School or from other approved academic institutions and medical schools may pursue a research project with members of the UVA DOPS faculty. It is possible to set up special research projects related to the scope of what is being studied DOPS, provided that a member of the DOPS research faculty has made arrangements to act as collaborator or an associate supervisor on the project.

Here are some examples of published academic papers that came out of specially arranged and approved selected projects with visiting medical students and UVA medical residents.  All of these medical students and residents collaborated with Dr. Bruce Greyson around the topic of Near-death experience research.

Do Prevailing Societal Models Influence Reports of Near-Death Experiences? A Comparison of Accounts Reported Before and After 1975 by Geena Athappilly, M.D. and Bruce Greyson M.D. (Journal of Nervous & Mental Disease, 194, 218-222, 2006).  This article compares the phenomenology of 24 NDEs that were reported prior to Dr. Raymond Moody’s introduction of the term “NDE” in 1975 with 24 recently reported NDEs, matched on relevant demographic and situational variables. Tunnel phenomena were reported more frequently in the recent NDEs, but 14 other features described by Moody were reported as frequently in the pre-1975 NDEs as they were in the recent cases. This consistency in NDEs reported before and after Moody described the “typical” NDE suggests that NDEs reports have not been substantially influenced by prevailing cultural models. (pdf)