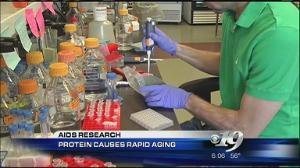 Dr. Michael Wiener’s Lab has been in the news, focusing on exciting developments.

From the University’s PR department:

CHARLOTTESVILLE, Va., March 29, 2013 – Researchers at the University of Virginia School of Medicine have determined the molecular structure of a protein whose mutations have been linked to several early aging diseases and side effects for common HIV and AIDS medications. This breakthrough could eventually help researchers develop new treatments for these early aging diseases and redesign AIDS medications to avoid side effects such as diabetes.

Their findings were published March 29 in the journal Science.

The nucleus of a cell is lined with a mesh-like structure called lamin that serves as a scaffold for maintaining nuclear shape and function. Lamin requires the action of another protein, called Ste24p protease, which removes specific parts of the lamin filament and enables proper assembly of the mesh. The research team determined the structure of a Ste24p protein found in a close relative of baker’s yeast, whose properties are interchangeable with the same protein found in humans.

The experiments required to solve the structure of Ste24p were performed remotely at the Advanced Photon Source, part of the Department of Energy’s Argonne National Laboratory near Chicago. UVA funds access to the laboratory, Horanyi said, to enable researchers to use specialized X-ray crystallographic capabilities available through the South East Regional Collaborative Access Team at the Advanced Photon Source. Working from Charlottesville, UVA researchers can log onto a computer program to remotely control the robots to perform research and to collect data. “It’s like using a web application,” Horanyi said.

In humans, improper processing and assembly of lamin lead to a group of diseases known as laminopathies, which include muscular dystrophy, cardiomyopathies and a collection of rare accelerated aging diseases in children called progerias. The research team focused on Ste24p, Pryor said, because defects in this protein in humans are responsible for a number of progerias.

In addition, some frequently used HIV and AIDS medications utilized in Highly Active Antiretroviral Therapy (HAART) also interact with Ste24p, altering how patients taking the drugs metabolize fat and leading to treatment side effects that can include insulin resistance and diabetes, Pryor said.

Knowing how the protein is structured could aid researchers in developing drugs to treat progerias and could assist in the redesign of HAART medications to avoid the treatment side effects, Wiener said.

Pryor noted that Ste24p is a biomarker for normal aging in humans – as humans get older, this protein works less effectively. “So this mapping could provide insight to researchers into the aging process for humans,” he said.