Dr. Harris has spent her scientific career studying parasitic pathogens that infect the central nervous system. As a graduate student, she studied the innate immune response to Trypanosoma brucei rhodesiense, the causative agent of Human African Trypanosomiasis. During her postdoctoral training, Tajie began studying the adaptive immune response to Toxoplasma gondii. During this time, she began using several microscopy techniques, including multi-photon microscopy to understand how T cells responses are coordinated in real time within the brain. At the University of Virginia, Tajie is a member of the Center for Brain Immunology and Glia and the Carter Immunology Center. Tajie enjoys traveling, cooking with locally grown produce, and being outdoors with her golden retriever, Oskar.

I received my bachelor’s degree in biochemistry from Vassar College in 2015. I have always been interested in infectious disease, particularly how pathogens interact with the host immune system. The Harris lab provides an opportunity to work at this interface as it applies to the fast-growing field of neuroimmunology. I am currently investigating the role of alarmins in chronic Toxoplasma gondii infection. Outside of the lab I enjoy reading, photography, and yoga.

I received my undergraduate degree in Biology from James Madison University in 2012. Eager to explore my post-baccalaureate options, I worked for a year as a technician in a biotechnology lab and for two as a fellow in the National Cancer Institute. Ultimately, clinical volunteering and literature led me to neuroimmunology and a sense of urgency in applying to graduate school. I am specifically interested in immune cell recruitment to the brain T. gondii infection. Outside of the lab I enjoy backpacking, triathlon training, yoga, and reading.

I entered the MSTP program at UVA in 2016 after working for two years in a cancer genetics lab as a post-bac research trainee at the National Cancer Institute. I spent my time there trying to understand the mechanisms underlying the association between common human genomic variants and susceptibility to melanoma. Since starting my graduate studies, my interests have shifted to exploring the role of the immune system in neurologic disease. Outside of work, I enjoy cooking, running, and spending time outdoors. 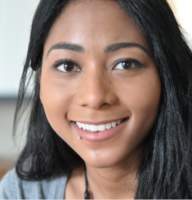 I received my undergraduate degree from UVA with a double major in Psychology and Biology. Prior to joining the Harris lab, I worked in behavioral and systems-level neuroscience laboratories. I was initially interested in studying microglia under the lens of neurodevelopment, and later became drawn to understanding their role in immunity. In the Harris lab, I am currently investigating the role of microglial STAT1 signaling in conferring resistance to Toxoplasma gondii. Outside of the lab I enjoy reading, painting, and spending time with my Chihuahua, Kiwi.

I graduated with masters from Georgetown University. After graduation, I worked as lab specialist in the division of Nephrology at UVA studying the immune response to autoimmune disease model of nephritis. In Harris lab, I investigated the role of CNS resident cells during Toxoplasma gondii. Outside of lab, I enjoy painting, cooking, reading, binge watching TV shows, and napping.

I began research in the Harris Lab during my third year. Under Jeremy’s guidance, I worked on studying the immune response to Toxoplasma gondii. Outside of lab, I love hiking, listening to music, cooking, and spending time outdoors!

I got a bachelor’s degree in Biology and French from DePauw University in 2013. As an undergrad, I did research in a neuroscience lab, but immunology was always my primary interest, and I joined the BIG (Brain Immunology and Glia) center to get the best of both worlds. My project in the lab focuses on characterizing the phenotype and behavior of regulatory T cells in the brain during Toxoplasma gondii infection. Outside of the lab, I enjoy ballet, volleyball, and watching horror movies.