The treatment of astrocytomas, whether low or high grade, is largely defined by the ability to effectively reduce the tumor burden as much as possible and to lessen the rate of recurrence. Except in the case of pilocytic astrocytoma cure is rare. Classically the goal of reducing tumor burden is obtained by gross total resection with a margin of “normal” brain when possible and post operative radiation in the case of more malignant tumors. The indication for radiation therapy for intermediate grade tumors, chemotherapy, repeat surgical debulking and other therapies is dependent upon several factors, many of which are not clearly defined. Into this cornucopia of choices, Gamma surgery has been introduced. Intellectually, we have difficulty accepting widely the application of a focused technique for an infiltrative process. Nevertheless recent results showing improved survival indicate that this negative attitude may be inappropriate.

In the case of low grade tumors Gamma surgery can be used in the place of surgical resection when the tumor is in an inaccessible location (e.g. brainstem) or when the patient opts for this alternative. Their small size and relative circumscription makes planning straightforward and fairly good results have been obtained.

For high grade tumors Gamma surgery may be employed in several ways. If the tumor is small and in an inaccessible location (e.g. thalamus), Gamma surgery is used to treat the tumor primarily. Focal or whole brain irradiation is also used as an adjunct therapy. The incidence of radionecrosis is relatively high when aggressive protocols are used and differentiating recurrence from this phenomenon can be problematic. Gamma surgery can also be used as an adjunct to surgical resection. The incidence of residual post operative tumor is unfortunately not uncommon after “total” surgical resections and care is often taken when the tumor abuts eloquent brain so as not to leave neurological deficit even at the expense of incomplete gross tumor resection. In these cases, gamma surgery can be used to treat the residual tumor. Whole or focal radiation therapy has been used to lower the recurrence rate after these surgical therapies have been undertaken.

We have treated 56 benign astrocytomas. The general indication was a deep seated tumor not amenable to surgical resection or which the patient insisted on Gamma surgery.

We have treated 15 patients with grade I astrocytomas with greater than one year follow up available. Tumor size was found to be important with best results found in patients with a tumor volume less than 3 cm2. Of these patients the tumor disappeared in one case (7 percent), shrank in eight (53 percent) and increased in six (40 percent).

Two patients were subsequently operated upon, one for increase in tumor size and one for a hemorrhage and radiation induced changes. In two patients, a cyst associated with the tumor enlarged while the solid portion became smaller. One of these patients is the only patient to have a decline in neurologic function following Gamma surgery.

We have follow up of over one year for 17 grade II astrocytomas available. Three (18 percent) disappeared, seven (41 percent) shrank, two (12 percent) remained unchanged and five (31 percent) increased in size. One patient died from progression of his disease at 46 months after treatment. No relationship was found between pre-treatment tumor size and outcome. These results are similar to other reported series.

From an intellectual standpoint, it is difficult to understand how a patient with a highly invasive and diffuse tumor like a high grade glioma can benefit from such a focused treatment as Gamma surgery.   However, when coupled with chemotherapy and fractionated radiation therapy, the Gamma Knife can be used to treat the largest concentration of the residual tumor based upon the neuroimaging studies.  It seems clear that no single treatment modality in the neuro-oncology armamentarium is a magic bullet for such tumors, and, as such, this multimodality approach to high grade gliomas is prudent.

We have treated 56 malignant astrocytomas. Our experience has been similar to other reported series with the 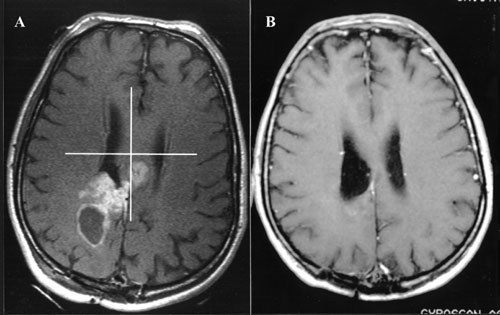 majority of patients showing initial decrease insize or remaining stable for a period of time, however, recurrence and progression is the rule with these tumors and no therapy is curative. Because of the differences in histology and the wide variety of therapies and protocols available for these tumors it is difficult to judge the benefit of Gamma surgery. Although our group and Nwokedi et al. (2002) have observed a statistically significant (sic) prolongation of life expectancy in the group of patients undergoing aggressive multi-modality treatment (e.g. including some or all of the following:  radical tumor debulking, radiation therapy, chemotherapy and Gamma surgery), it remains to be seen if these findings will be borne out in larger, better controlled studies. The limit of the benefit that radiation can contribute to the treatment of these lesions seems to have been reached, hence it may be stated that the dose escalation with the Gamma Knife in the treatment protocol of this disease will change only marginally the clinical outcome.  It is also conceivable that targeting tumor angiogenesis and finding ways to induce apoptosis will have some impact on the management of these cases.