Thalamotomy for tremor in Parkinson’s disease remains one of the most gratifying procedures in functional neurosurgery and defends its place in the therapeutic armory for those common cases in which drugs fail to stop the tremor. However, to avoid the potential risks of open thalamotomies, the prototype of the Gamma Knife was used by Leksell for the production of thalamic lesions in five cases of tremor between 1968 and 1970. At that time, the intended target could not be visualized but was indirectly determined by using derived coordinates relative to the anterior and posterior commisures visualized by pneumoencephalography. 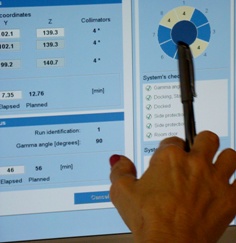 Verification that a lesion had been produced could not be obtained because neither CT nor MRI was available.
The fixation of the head of the patient for the radiosurgical procedure was also unsatisfactory, because the stereotactic frame used for target localization was too large to fit into the collimator helmet. Instead, fixation devices were applied onto a plaster-of-Paris helmet previously molded on the patient’s head. It is therefore not surprising that beneficial results were lacking. In 1986, MRI was introduced at Karolinska Hospital, and better anatomic visualization of the target volume became possible. A new stereotactic frame compatible with MRI that also served as the fixation device in the Gamma Knife was introduced.

These improvements paved the way for new attempts to relieve Parkinsonian tremor by gammathalamotomy, and the first two cases was treated using this improved methodology. The procedure was performed using an 8-mm collimator, and the volume of the resulting lesion was much larger than intended (1.5 cm3). The tremor began to dwindle after 2 months, but a transient hemiparesis and mild speech disturbance ensued secondary to edema. The eventual outcome was, however, satisfactory, and 4 years after the treatment the patient returned free of tremor contralateral to the side of the thalamic lesion, asking for a second procedure to stop the tremor that had developed on the other side.

The second patient was treated using a 4-mm collimator, which gave a smaller volume to the thalamic lesion. In this case, the clinical result was not satisfactory. She was treated a second time without relief of tremor. It is not clear whether the lack of effect was due to the atypical clinical picture in this patient or to the lack of physiologic corroboration of the target. In spite of experience from centers active in this field indicating that modern imaging techniques, especially MRI, may obviate the need for physiologic target definition, this remains controversial. Lim et. al. showed a high incidence of delayed internal capsule stroke in patients treated with stereotactic radiofrequency lesioning in patients with a previous history of vascular disease. If these results are reproduced then Gamma surgery may be the primary treatment of choice at least for that subgroup most at risk for stroke.

Pioneering works in neuroanatomy and neurophysiology by Hirai Jones, and Ohye have shed much light on the position, anatomic organization, and physiological significance of the thalamus as it pertains to tremor, rigidity, and dyskinesia.  MRI guidance for selective thalamotomy in the treatment of Parkinsonian or essential tremors has been well established.  The correlations between neuroanatomical and electrophysiological findings in the human ventrolateral thalamic nuclei (e.g. VLa, VLp, VPLa, VPLc) are better understood.  For Gamma Knife surgery, the difficulty arising in identifying the VLp and VLa nuclei in the human thalamus purely by radiological methods.  As such, thin slice MRI, Surgiplan and a neuroanatomical atlas may be required to treat these nuclei with the Gamma Knife. 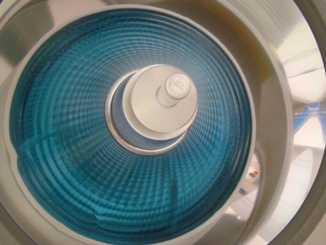 Rand has treated 18 cases of movement disorder with radiosurgery (R. Rand, personal communication, 1994). Of the seven patients with resting tremor, four responded to a nucleus ventralis lateralis (NVL) lesion with marked improvement in the tremor, and in two patients, rigidity improved as well. Eight other patients underwent radiosurgical pallidotomy for rigidity, and four had a significant improvement. Two of three patients treated with a NVL lesion for intention tremor showed dramatic improvement. Results termed “good”, “excellent” or complete relief of tremor by the authors was accomplished in 63 percent of patients treated with thalamic lesioning in 34 patients treated by Duma et. al. and similar results by Young et. al., Ohye et. al., and Niranjan et al.

Ohye (C. Ohye, personal communications, 2004) has performed Gamma thalamotomies on 56 patients for Parkinson’s disease, 21 with essential tremor, and 6 with intention tremor.  Thalamotomies were performed using a single 4 mm shot and 130 Gy dose.  Follow-up MR imaging revealed two different types of thalamic changes.  One type was a round, punched out lesion with a volume of less than 100 mm3, and the other was an irregular high signal zone (volume up to 800 mm3) which may extend into the internal capsule and streak along the border of the thalamus.  The efficacy of the procedure did not seem to correlate with the type of post-op imaging observed.  Ohye noted improvements in tremor and/or rigidity in 85% of patients.  Hirai (T. Hirai, personal communications, 2004) has treated 14 patients with Gamma surgery for involuntary movement disorders.  Of these 14 patients, 8 had tremor dominant Parkinson’s, 4 rigidity and dyskinesia dominant Parkinson’s, and 2 had essential tremors.  Hirai’s target points were the VLp nucleus for control of tremor and the VLa nucleus for control of rigidity and dyskinesia.  The maximum dose varied from 130-150 Gy; a single 4mm isocenter was used to make each lesion.  At last follow-up, 13 out of 14 patients noted subjective improvement in their symptomatology.  In 9 of these patients who had at least one year follow-up, Hirai noted symptomatic improvement by 50% to 90% in the patients’ Unified Parkinson’s Disease Rating Scale for tremor, rigidity, and dyskinesia scores.  On follow-up MR imaging, Hirai observed T2 weighted changes 3 months after Gamma surgery, and these lesions gradually increased to 5 to 8 mm in diameter.  In another series, Young et al. reported significant improvements in Unified Parkinson’s Disease Rating Scale tremor and rigidity scores in 74 out of 102 patients (73%) at 4 years post-Gamma knife thalamotomy; in those with essential tremor, 88.2% remained tremor free at 4 years post-operatively.  The Gamma Knife may even be able to lesion the subthalamic nucleus.

A pertinent change in the surgical management of movement disorders, particularly Parkinsonian tremor, was the introduction of deep brain stimulation (DBS) which allows the amelioration of symptoms without a destructive lesion. Good results have been obtained with this technique, and, at present, deep brain stimulation has supplanted destructive lesions as the surgical procedure of choice in most patients.  The enthusiasm for deep brain stimulation may be lessened by the high rate of complications and cost.  As the benefits and risks for DBS become better defined, neurosurgeons will be able to counsel patients and select the more appropriate neurosurgical tool (i.e. Gamma Knife or DBS).  It is difficult to predict the extent to which these two competing neurosurgical tools (i.e. the Gamma Knife and deep brain stimulators) will be used in the future for treatment of movement disorders.