Despite therapeutic progress in recent years, conventional treatment of anxiety disorders fails or has only a temporary effect in 20 percent of patients. These disorders are often severely disabling and are associated with rates of suicide comparable to those of depression. First described by Leksell, psychosurgery targeting the frontolimbic connections in both anterior internal capsules (capsulotomy) is a valuable therapeutic method for selected severe cases. The first cases using the Gamma Knife to create the lesions were also performed by Leksell.

Mindus et. al. at the Karolinska Institute reported the effects of such procedures on the anxiety symptoms and personality characteristics presented in conjunction with results of imaging studies performed by MRI and PET. The patient material comprised two series of patients with a 15 years mean duration of psychiatric illness, in all of whom various extensive treatment trials had previously been made. One series consisted of 24 patients subjected to capsulotomy by a conventional thermocoagulation technique and followed for 1 year. The other series comprised 7 patients treated by Gamma surgery and followed for 7 years. The clinical effects of these treatments were evaluated subjectively by two independent observers and also rated on the Comprehensive Psychopathological Rating Scale (CPRS). Ratings were performed 10 days before and 2, 6, and 12 months after surgery. The effects on the personality were evaluated by the Karolinska Scales of Personality (KSP). These scales have been developed to measure traits related to frontal lobe dysfunction and to reflect different dimensions of anxiety proneness. 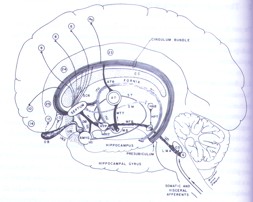 At the 12-month follow-up, statistically and clinically significant improvement was noted in all assessments of symptomatic and psychosocial function. Freedom from symptoms or considerable improvement was noted in 79 percent of patients, and none were worse after the operation. Negative effects on the personality were not noted. Behind these numbers are numerous examples of dramatic improvements in individual lifestyles. A number of patients were preoperatively unable to work or function socially owing to such problems as preoccupation with personal cleanliness and the inability to use public transportation, with resulting domestic confinement, aggravated psychological problems, deterioration of family relationships, and devastation of personal economy. Postoperatively, these patients could return to their previous occupation and to a normal social function. The results of gamma capsulotomy were found to be comparable to those of capsulotomy performed by the thermocoagulation technique. Only in five of the seven patients could a lesion be demonstrated by MRI, and those were the patients who benefited from the procedure. The lowest effective target dose was 160 Gy, whereas 100, 120, and 152 Gy failed to produce lesions.

Treatment of a new series of 10 patients was started in 1988, using stereotactic MRI for more accurate anatomic target localization and the new Gamma Knife model B to produce the lesions. In this series, the lesions were produced by using a 4-mm collimator and three isocenters on each side for overlapping fields, creating a cylindrical lesion. The maximum dose within the target volume was 200 Gy. Although it is too early to evaluate the long-term psychological effects in this series of patients, important radiological information, which will serve to plan future treatments, is already available. The development of the lesions has been followed by MRI and CT scans every 3 months. Magnetic resonance imaging has, not unexpectedly, been found to be particularly valuable for these follow-up studies. On T2-weighted images, a high signal appears in the target area after approximately 3 months. This signal is most likely produced by local edema. The edema extends a maximal volume at around 9 months and then slowly subsides. The edema is directly related to the dose and to the volume radiated. The preliminary impression is that the results equal those obtained in the earlier series. 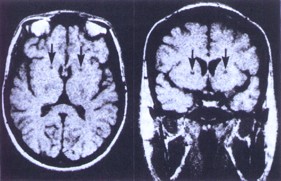 A comparison of the radiobiologic effects between these two series is unfortunately not possible, because neither MRI nor CT was available when the lesions developed in the first series of patients. In the second series, the edema was extensive in a few patients, and it may therefore be wise to adjust the dose or decrease the volume exposed to necrotizing doses in the future. It may be sufficient to use only one isocenter and the 4-mm collimator. With these treatment parameters and a maximal dose of 180 Gy, a lesion measuring approximately 50 mm3 can be expected within several weeks with only minimal transient edema.

Gammacapsulotomy offers several important clinical as well as scientific advantages over capsulotomy via an open technique. The most important is patient tolerance. It is our experience that this psychologically vulnerable group of patients is much more willing to undergo a closed stereotactic procedure, which in contrast to open surgery, leaves no external marks. Theoretically, the gradual development of the radiolesion may also allow the patient better psychological adjustment to his new situation. The psychological rehabilitation phase is an important part of any psychosurgical procedure.

If it would be ethically acceptable, a control group of patients could be subjected to spending time in the collimator helmet without radiation. In a later stage, if this sham procedure is proven to give no result in comparison with the real procedure, the control group would receive the appropriate treatment. Such a controlled study is probably necessary before the capsulotomy procedure is generally accepted.  Further efforts should also be made to study the biology of the developing lesions. Important questions are: When does the functional effect of the radiation start and what are the characteristics of the MRI and CT images at this time? Even the issue of dose-volume relationships needs to be addressed further. PET or SPECT imaging may help to answer some of these questions, and pre- and post-treatment evaluation is planned for further series of patients.  The experience from multiple centers suggests a degree of optimism for the use of radiosurgery in the treatment of intractable obsessive-compulsive disorder, and future research in psychiatric neurosurgery is proceeding in a cautious fashion.  Any such work necessitates the coordination and effort of a multidisciplinary team.