Meningiomas are usually benign, circumscribed tumors that arise from the coverings of the central nervous system and therefore tend to be superficial. Because of these attributes microsurgical extirpation of the entire tumor as well as any involved meninges is the treatment of choice. Unfortunately many meningiomas do not have one or more of the mentioned attributes. Aggressive, locally invasive tumors, especially those invading or involving critical or difficult to control neural or vascular structures, and those at the skull base can be problematic in their complete removal. The use of radiation to lower the recurrence rate following microsurgical removal of meningiomas was shown to be beneficial. Recurrence rates were found to be dramatically decreased, and for patients with residual tumor following surgery the progression of tumor growth was significantly decreased. 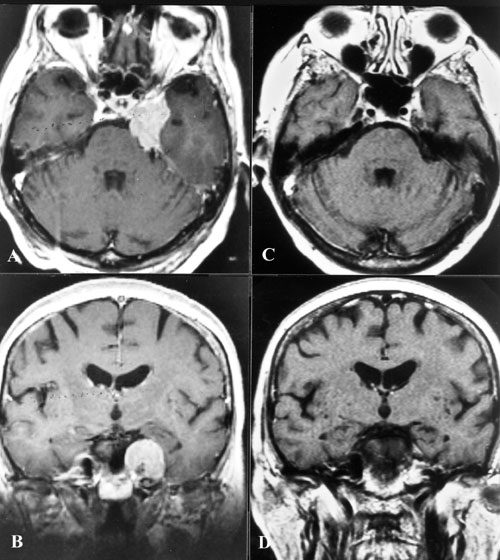 We have treated 329 meningiomas at the University of Virginia since 1989. The most recent evaluation of our material was for 206 patients with a follow-up of 1 to 6 years. Tumor volume ranged from 1 to 32cm2. These patients received an average of 38Gy maximum dose (range 20 to 60Gy) and an average periphery dose of 14Gy (range 10 to 20Gy). There were 142 patients treated for residual tumor and 64 treated with gamma surgery primarily. Radiographic follow-up was available for 151 patients. Of the evaluated patients 94 (63 percent) showed a decrease in the volume of their tumor greater than 15 percent. No change in size was seen in 40 (26 percent) and an increase in size in 17 (11 percent). The results of other centers reported in the literature are similar. (see Table 4).

Tumors within the parasellar compartment which is a part of the extradural neural axis compartment can be difficult to remove with microsurgery without significant morbidity. Residual tumor attached to still patent vascular or neural structures can be targeted with Gamma surgery and allows less radical microsurgical resection and a lower incidence of morbidity.

In the group of meningiomas that we treated, there were 112 within the cavernous sinus. In 68 percent the tumor either disappeared or shrank, in 30 percent they remained the same size and in 2 percent they have grown larger.  Petroclinoid meningiomas involving the cavernous sinus were not included in this series and are to be evaluated in the future.  The results of cavernous sinus meningiomas from the University of Pittsburgh group are similar in that the reported a 94% long term tumor control rate.  At the Karolinska Hospital between 1987 and 1993, a group of 40 patients were treated for skull-based meningiomas with Gamma Knife surgery.  These 40 patients received a median prescription dose of 16 Gy and have been followed for a median time of 9 years.  Tumor control was achieved in 87%, and a reduction in tumor volume was documented in 33%.  Neurological complications were observed in 11% of patients and tended to occur in those patients who received more than 20 Gy to the optic apparatus.  Few complications were noted when more modern threshold doses for sensitive structures were administered.  Distant tumor recurrences outside of the radiation field were noted in 6%.

We now have long term follow-up of 10 to 21 years in 31 meningiomas treated with the Gamma Knife. Two thirds of these tumors have either shrunk significantly or remained stable and among these were cases where only the vascular supply for the tumor was targeted . 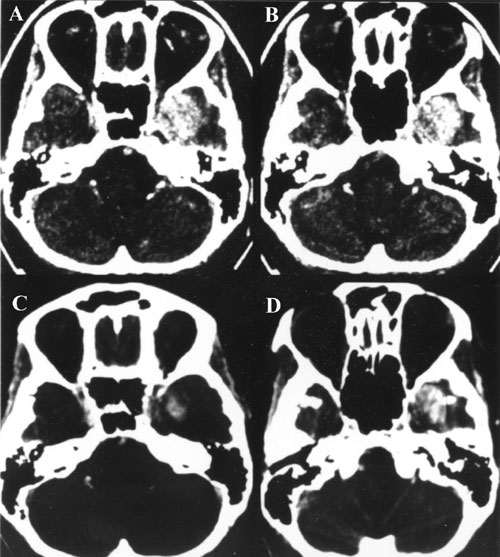 This has resulted in significant tumor shrinkage and lasting effect even in the long term.

Our practice has been to obtain a stereotactic angiogram prior to Gamma surgery for large tumors. This allows treatment to include the vascular supply for when ideal treatment is not possible because of radiation dose constraints imposed by the treatment volume.  Using MRI, the group from Heidelberg proved that radiation occluded small nutrient vessels of meningiomas providing the rationale for the treatment we have used since 1976.

We had no clinical complications treating meningiomas. However, a tumor without histological diagnosis and with equivocal imaging characteristics in the pineal region was treated as a presumed meningioma and bilateral edema of the basal ganglia occurred. This resulted in cognitive disturbances with incomplete recovery.

The primary therapy for meningiomas is microsurgery.  The advantage of histological diagnosis, debulking and reasonable chance of cure secures surgical extirpation as the procedure of choice for this tumor. The tumors most amenable to Gamma surgery treatment are less than 10 to 15 cm3 in volume. The ability of Gamma surgery to effectively treat small tumors with low morbidity argues strongly however for minimizing morbidity during open procedures. The option to treat residual tumor in critical or hard to reach locations should temper the ambition of total surgical removal. This is especially true in locations where complete meningeal resection is impossible and thus the chance of recurrence is high.