The lack of anatomic and pathophysiologic background knowledge of the mechanisms of pain makes management of pain by open or closed stereotactic techniques largely unsatisfactory.

Early results using Gamma surgery to produce thalamotomies for pain control were published by Steiner et. al.  All of the 52 patients treated suffered from terminal cancer and were treated prior to the advent of CT or MRI. Pneumoencephalography was used to target the thalamic centrum medianum-parafasciculus (CM-Pf complex). Good pain relief was obtained in 8 patients and moderate pain relief in 18. The patients had in general only temporary relief of pain. Of those with good pain relief, five died without recurrence of pain between 1 and 13 months after the procedure, and three had recurrence of pain at 3, 6 and 9 months. Doses between 100 and 250 Gy were tested. Observation of an actual lesion was only possible in 21 of 36 patients that had a post-mortem examination. Not surprisingly, the presence of a lesion was associated with relief. Lesions were only reliably created with doses greater than 160 Gy. The collimators used were 3 by 5 and 3 by 7 mm. The most effective lesions were more medially located near the wall of the third ventricle, and the greatest relief was for face or arm pain.

These results were not very encouraging. However with improvements in neuroimaging and alternate target selection it is possible that more effective lesions can be produced. Recent reports seem to support this expectation.  Hayashi et al. (2003) reported significant pain reduction in patients with severe cancer pain and post-stroke thalamic pain after Gamma Knife lesioning of the hypophysis.  Using the 4mm collimator and doses of 140 to 180 Gray, Young et al. have published effective pain relief in patients with chronic, intractable pain following medial thalamotomy with the Gamma Knife.   In a series of 15 patients followed for more than 3 months after a radiosurgical induced medial thalamotomy, four (27%) were pain free and five others (33%) had greater than 50% pain relief.  Additional investigation must be conducted before the role of the Gamma Knife for pain treatment can be fully defined. 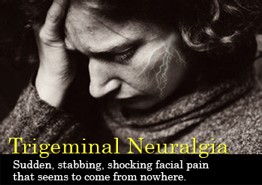 Trigeminal neuralgia (TGN) is a disorder of the fifth cranial (trigeminal) nerve that causes lancinating, episodic pain in the face which may involve the lips, eyes, nose, scalp, forehead, upper jaw, and lower jaw. A less common form of the disorder called “Atypical Trigeminal Neuralgia” may cause less intense, constant, dull burning or aching pain, sometimes with occasional electric shock-like feelings. Both forms of the disorder most often affect one side of the face, but some patients experience pain on both sides of the face. Onset of symptoms occurs most often in women over the of age 50. 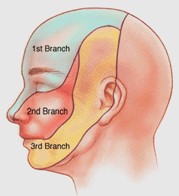 The trigeminal nerve is divided into 3 branches. Trigeminal neuralgia may involve any combination of these branches.

Recently, Gamma knife radiosurgery has become the treatment of choice for patients who have failed medical therapy for TGN. Recent advances in imaging and increased experience with its use, have underscored the importance of Gamma Knife surgery as a treatment option, and good pain relief has been achieved with its use.

The first time radiosurgery was used to treat trigeminal neuralgia, Leksell treated three patients with an orthovoltage stereotactic technique with long-term relief of symptoms. With the introduction of the Gamma Knife, a series of 46 patients were treated at Stockholm with less encouraging results (S. Hakansson, personal communication 1993). The target in these cases was the gasserian ganglion and targeting was by bony landmarks or cisternography. With advances in neuroimaging, most notably MRI, Gamma surgery for trigeminal neuralgia was revisited. However, the focus of treatment shifted from the ganglion to the nerve root entry zone. A number of centers have since shown the safety and at least short term pain relief with this approach.

A multi-center trial with 50 patients showed “good” to “excellent” relief of pain in 88 percent of patients (54 percent pain free and 34 percent with significant relief) at two years. Complete relief was found in 72 percent of patients treated with 70 Gy or greater. We failed to reproduce the reported long term results.

The majority of Regis et. al. series of 53 patients were pain free at a median follow-up of 55 months after Gamma surgery.  In a review of 220 patients treated at the University of Pittsburgh with a median radiosurgery dose of 80 Gy, complete pain relief was achieved in 64.9% of patients at 6 months, 70.3% at 1 year, 75.4% at 33 months.  At 5 years, only 55.8% had either complete or partial pain relief.  The results for patients with atypical facial pain were worse.  Following radiosurgery, 10.2% developed new or increased facial paresthesias or numbness.  With those who experienced recurrence of their trigeminal neuralgia, repeat Gamma surgery afforded complete pain relief in only 48% and, despite a dose reduction to 50 to 60 Gy, carried an increased risk of new sensory deficits.  In a series of 54 patients with a median follow-up of 12 months, the results from the Barrow Neurological Institute were less favorable with only 35% achieving complete pain relief.

Six cases of refractory cluster headache (five chronic and one episodic) were treated by Gamma surgery directed at the trigeminal nerve root entry zone. “Excellent” results were reported in four cases (off medication), “good” in one and “fair” in the other with an 8 to 14 month follow up. 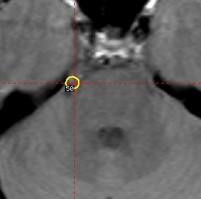 Gamma Knife surgery targeting of the trigeminal nerve for neuralgia

At the University of Virginia, we have recently reviewed our treatment of 146 cases of trigeminal neuralgia (TN) with Gamma Knife surgery.  In this group, radiosurgery was performed once in 131 patients, twice in 14 patients, and three times in one patient.  The types of trigeminal neuralgia were as follows:  126 patients with typical TN, 3 with atypical TN; 4 with multiple sclerosis associated TN; and 10 patients with TN and a history of a cavernous sinus tumor.  In each case, the radiosurgical target chosen was 2 to 4 mm anterior to the entry zone of the trigeminal nerve into the pons.  The maximal doses varied from 50 to 90 Gy.  The median follow-up was 18 months (range 2 to 96 months).  The mean time to pain relief was 24 days (range 1 to 180 days).  The percentage of patients who were pain-free at 1, 2, and 3 years post-radiosurgery was 48%, 46%, and 39%, respectively.  The percentage of patients who experienced some degree of improvement in their pain was 90%, 77%, and 70% at 1, 2, and 3 years follow-up, respectively.  Eleven patients (8%) developed the onset of facial numbness post-radiosurgery.  Although less effective than microvascular decompression, stereotactic radiosurgery remains a reasonable treatment option for those patients who are unwilling or unable to undergo more invasive surgical approaches, and it offers a low risk of side effects.