The efficacy of radiation in the treatment of pituitary adenomas was well documented before Gamma surgery was used for this disease. Reduced fractionation techniques had been shown to have effectiveness in the treatment of Cushing’s disease and was the impetus for the use of radiosurgery. MRI has replaced less exact invasive localization procedures (cisternography) and CT in the planning of Gamma surgery in patients with pituitary adenomas. There still remain difficulties with the use of Gamma surgery. The periphery dose that can be delivered for macroadenomas is limited if the optic nerve apparatus is in contact with the tumor. Localization of microadenomas can be difficult with even the best MRI examinations (e.g. a fat suppression MRI protocol) and amelioration of hypersecretory  syndromes is delayed. 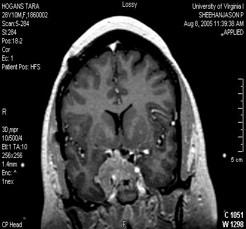 One of the best indications for Gamma surgery of secretory or non-secretory pituitary adenomas is residual tumor that is not removable with microsurgical techniques (i.e. within the cavernous sinus). If it is known before microsurgery that the cavernous sinus is involved and a debulking procedure is considered, then every effort to clear the tumor away from the optic nerves and chiasm should be made in order to make Gamma surgery post-operatively more effective. A suprasellar approach should be considered if there is doubt that this can be accomplished through a transsphenoidal approach. There is some difficulty in differentiating residual tumor from post-operative changes on MRI even with fat saturation protocols. A thorough operative note concerning any foreign material or grafts left behind is important, as well as a high quality pre-operative scan for comparison.

Another indication for Gamma surgery is persistence or recurrence of elevated hormone levels after microsurgery. In the presence of residual or recurrent tumor that is not readily amenable to further extirpation, either because of its location or the inability to localize the tumor within the sella, gamma surgery can be applied. Tumor within the cavernous sinus can be treated as with other macroadenomas. Difficulty in localizing the tumor usually requires radiosurgical targeting of all the contents within the sella, and such an approach carries a fair risk of post-radiosurgical hormonal insufficiency.  If the patient has a secretory microadenoma but the symptomatology is not urgent and microsurgery is for some reason not considered, then gamma surgery can be used as the primary therapy. 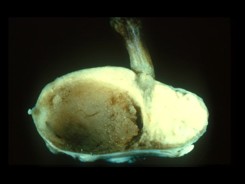 A pituitary adenoma seen on left and normal pituitary gland on the right.

Most centers have observed effective growth control of pituitary adenomas following Gamma Knife surgery ( Table 3A).  However, there have been a wide range of outcomes with regard to hormonal normalization of secretory adenomas.  The varied outcome results for hormonal normalization may arising from the following reasons:  (1) early studies utilized CT rather than more precise MR imaging for dose planning; (2) different criteria for defining an endocrinological cure have been applied in various studies and there is little consensus even within the neuro-endocrinological community for precise defining criteria; and (3) many studies had short or intermediate follow-up periods and may not have been long enough to observe patients with an endocrinological recurrence following an initial remission.

We have treated 270 pituitary tumors, all macroadenomas and locally invasive ( Table 3B). There were 5 malignant tumors. All had been previously treated one or more times by some other modality. Microsurgery alone was used in 90.3 percent, radiation therapy and microsurgery in 8.2 percent and radiation therapy alone in 1.5 percent. Tumor volume ranged from 0.9 cm3 to 32 cm3 with an average volume of 11 cm3.

Tumors were treated with a maximum dose of 6 to 60 Gy (average 37.5 Gy). Periphery dose ranged from 3 to 28 Gy (average 15 Gy).  This discrepancy is due to variations in patient profile. Patients that had received previous radiation therapy or had a tumor close to the optic apparatus in general received lower doses. Currently, Gamma Plan, the planning software for the Gamma Knife, allows for very specific shielding of the optic nerves and chiasm, and this has allowed for higher doses to be administered when these structures are nearby.

We have treated 92 non-secretory pituitary tumors, 82 of which have radiographic and endocrinological follow up of a minimum of 6 months and an average of 34 months. Of these, 55 (67 percent) had a decrease in the volume of their tumors. Twenty-one had no change in the size (26 percent) and six increased in size (7 percent).  New hypopituitarism occurred in 12 patients (15 percent).  The only indication we have to date for treating these tumors is for post-operative residual tumors in order to lower the incidence of tumor progression or progression in spite of previous radiation therapy.

Seventy-four patients with ACTH secreting tumors underwent 80 Gamma Knife procedures. These tumors had all been treated with microsurgery before radiosurgical consultation. Imaging follow up demonstrated a decrease in the size of the tumor in 61 cases (76 percent) no change in 13 (16 percent) and an increase in size in 6 (8 percent). However since the hypercortisolism defines the dangerous character of the ACTH secreting tumor, the control of endocrine abnormalities is the true measure of tumor control. Normal 24-UFC levels were achieved in 46 patients (64%), at an average time of 10.6 months post-treatment (range 1-40).   Six of these patients had repeat Gamma Knife procedures, with four patients achieving another remission.   New endocrine deficiencies developed in eighteen patients (24%), with growth hormone deficiency being the most commonly found new endocrinopathy.  Four patients developed new-onset visual acuity deficits, two of whom had received prior conventional fractionated radiation therapy.  Evidence of radiation-induced changes was seen in three patients but only one had symptoms attributable to these changes.  These findings are notably different from our earlier published results in that more patients went on to develop a recurrence after an initial period of hormonal remission.

The results of 35 patients treated at the Karolinska Institute have been reported.  Of the 29 patients that had follow up of up to nine years, 22 (76%) had normalization of their endocrine abnormalities, ten within one year and the remainder within three.

We have performed 74 Gamma Knife procedures on 70 patients with growth hormone secreting adenomas. Reliable endocrine follow up is available for 38 of these patients. There was normalization of IGF-1 in 43% of cases. No patient had an elevation in growth hormone level after Gamma surgery.  Five patients developed 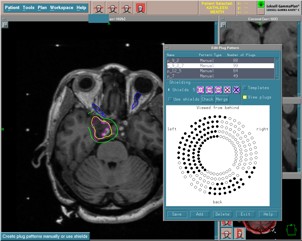 recurrence of their acromegaly after initial remission, with a mean time to recurrence of 47 months.  New endocrinological deficiencies developed in 31% of patients, with hypothyroidism and low testosterone levels being the most common new endocrinopathies.

Of the 22 prolactin secreting tumors treated by us at Virginia 16 have radiographic follow up of 6 months or more. Eleven (69 percent) had a decrease in the size of their tumor, 3 were unchanged (19 percent) and 2 were increased (12 percent). Endocrine follow up was available for all 22 patients. There was remission in 44 percent of cases and no change in the remaining 56 percent.

At the University of Virginia, we have performed Gamma surgery on 14 Nelson’s patients.   All patients had documented tumor growth and hyperpigmentation as well as elevated ACTH levels (mean of 840ng/mL) at the time of radiosurgery.   One patient had previously received conventional fractionated radiation therapy, and two patients had received prior Gamma surgery for Cushing’s disease.  Mean endocrine follow-up was 33 months (range: 6-78 months), and mean radiological follow-up was 31 months (range 5-72 months).  Median dose to the tumor margin was 25 Gy (range 4-30Gy).    Tumor growth control was achieved in 12 out of 14 patients (86%).  ACTH levels decreased in 14 patients (81%) with a median decrease of 59% (range: -93% to +33%).  Five patients (31%) achieved normal ACTH levels with a mean time to remission of 9.4 months post-radiosurgery.  New endocrinopathies were seen after 5 Gamma Knife procedures (31%), with low growth hormone levels being the most common new hormonal deficit.  No patients exhibited radiographic or clinical evidence of damage to the optic apparatus or surrounding brain. 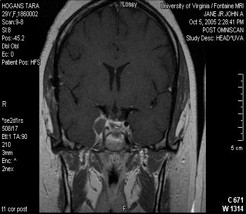 It is worth noting that there is a wide variation in both the rates of endocrinological cure and hypopituitarism following Gamma surgery.  The difference in cure rates between modern radiosurgical series is likely due to the definition of cure employed and the length of follow-up.  However, the discrepancy in the reported rates of hypopituitarism is more likely a function of the degree to which there is rigorous endocrinological follow-up testing.

Table 3A:  Results of Gamma Knife Surgery for Pituitary Adenomas