UVA is one of the first centers in the world to treat patients with the Gamma Knife Perfexion, the first total redesign of the technology in 30 years. Gamma Knife has always been the gold standard for intracranial radiosurgery, and Perfexion improves accuracy and precision even more. Perfexion can improve survival times for patients with metastatic brain tumors, and improve cognition during survival times. Regular radiation therapy is more likely to damage cognition. With perfexion, patients can have multiple tumors treated within a single session.

Except for solitary lesions causing mass effect, the treatment of metastatic brain tumors is primarily palliative. In the instance of solitary metastasis the occurrence of long term survival is not unheard of, however in general the guiding philosophy is generally palliation, reversal of neurological deficits and maintenance of quality in life. There has been some disagreement regarding the total number and volume of tumors that can be treated with Gamma surgery in the instance of multiple metastases. Our general guideline is not to treat more than three if that is known to be the case. We have treated more but usually when additional lesions were discovered on the treatment MRI. The integral dose that the remainder of the brain receives is difficult to determine when making more than one treatment plan. Studies indicate that treating more than three lesions at the same time will increase the integral dose to the brain to levels requiring lowering of the prescription dose to the individual lesions, reducing the efficacy of the treatment.  However considering the limited survival expectation in these patients, the need for pertinence of rigid consideration of integral dose is debatable.

If metastatic deposits are located very far from one another in space the ability to treat them all with the same frame placement may be difficult due to the limitation of the space within the treatment helmet.  Such consideration makes frame placement for widely separated metastases a challenge at times.

Surgical extirpation of a solitary brain metastasis has been shown to significantly prolong survival if the primary disease is controlled. Likewise whole brain irradiation has been show to be of benefit for some tumor types. These conclusions and the well defined limits on neuroimaging studies of most metastatic lesions make them very amenable to Gamma surgery. Because of this as well as the high incidence of these lesions, the treatment of metastatic tumors is presently a frequent indication for Gamma surgery worldwide.

Most reports regarding Gamma surgery for metastatic tumors report a 7 to 15 month survival following treatment (See Table 6). Local tumor control rates range from 71 to 98.5%.   The histology, dosages and previous treatments vary considerably through the literature. Most centers are using a periphery dose of 12 to 20 Gy  and a maximum dose of at 40 Gy. These doses are adjusted down if whole brain irradiation has been given previously. The reduction of dose in the instance of tumors that appear after whole brain irradiation is possibly not necessary or desirable.  In a study comparing the efficacy of surgery plus whole brain radiotherapy with radiosurgery alone in the treatment of solitary brain metastases less than or equal to 3.5 cm in diameter, local tumor control and 1-year death rates did not statistically differ between the two groups.  In a large, multi-institutional study, the omission of up-front fractionated radiation therapy did not compromise the overall length of survival in brain metastasis patients who had undergone radiosurgery.  Radiosurgery even appears to be efficacious for treating traditionally relatively “radioresistant” brain metastases such as melanoma and renal carcinoma.

We have treated 911 patients for metastatic tumors to the brain. Only in some instances has individual histological types been analyzed. Evaluation of our series demonstrated a 83 percent control rate of treated lesions (disappeared, shrank or did not change) and a median survival of seven months. Eleven percent disappeared, 63 percent shrank and 10 percent were unchanged . 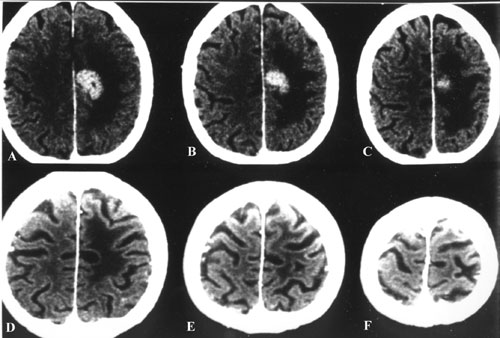 Sixteen percent increased in size. The usual cause of death was systemic disease.

The various primary tumor types in some instances have been evaluated separately. A series of 21 patients with 37 renal cell carcinoma brain metastases was evaluated and treated by us at Virginia. There was an average survival of 8 months following radiosurgery.   Of the 23 tumors with post-treatment neuroimaging, one remained unchanged in volume, 16 decreased in volume, and six disappeared; no renal metastasis progressed following Gamma surgery. An unmatched control group of 119 patients that received external brain radiation therapy had an average survival of 4.4 months. Factors associated with longer survival in the group treated with Gamma surgery included a higher Karnofsky performance status, absence of extracranial metastases, adjutant whole brain radiation therapy and prior surgical resection. Surprisingly size and number of metastases did not have a significant effect on survival, although in cases of single metastasis with controlled local disease long term survival could be achieved .

A large series of patients with metastatic disease to the brain was reported by Shiau. They showed that melanomas had shorter freedom from progression intervals than other histologies (adenocarcinoma, renal cell carcinoma) and that certain imaging characteristics were associated with survival. Multivariate analysis showed that longer control of treated lesions was significantly associated with higher prescribed dose, a homogeneous pattern of contrast enhancement, and a longer interval between primary diagnosis and Gamma surgery.

Of 32 metastatic melanomas treated by Somaza et. al. 97 percent disappeared, shrank or remained unchanged. Average survival in their series was 9 months with systemic disease being the cause of death in nearly all cases. Three patients remained alive at 13 to 38 months following Gamma surgery. Seung et. al. treated 55 patients with 140 metastatic melanomas and had an average survival just short of 8 months. Freedom from progression was seen in 89 percent of tumors at 6 months and 77 percent at one year. Survival was related inversely to total tumor burden and less to the number of metastases.

In another analysis of 45 patients treated for 92 melanoma metastasis at Virginia, the median survival was 10.4 months following radiosurgery and local tumor control was 82%.  A single metastasis and absence of extracranial disease correlated with improved prognosis.  Our radiosurgical experience with other histological subtypes of metastases besides melanoma, lung carcinoma, and renal carcinoma has generally been comparable in terms of survival and local tumor control.

For brain metastases from breast carcinoma, we have treated 43 patients with a total of 84 lesions.  Overall median survival was 13 months after gamma knife surgery.  Univariate analysis revealed that a high Karnofsky performance score and a single lesion correlated with increased survival while multivariate analysis revealed Karnofsky score and age as related to survival.  Overall median time to local tumor control failure was 10 months.  Higher Karnosky score and prior chemotherapy led to improved local tumor control.