Seizure was the presenting symptom in 59 of the 247 patients with arteriovenous malformations (AVM) of the brain treated by Steiner with Gamma surgery between 1970 and 1984. The treatment resulted in the relief of some or all seizures in 52 of these patients. Eleven were successfully taken off anticonvulsant medication. Interestingly, in three patients the seizure disorder stopped although the AVM itself was unaffected by the radiation. These observations and the observations made by others prompted the idea of testing focal irradiation as a treatment modality for focal epilepsy.

At the neurosurgery department at the University of Virginia basic science research was done on changes in neuroexcitability after irradiation. The hippocampal slices from rats treated with the Gamma Knife were found to have a higher seizure threshold than those of controls when placed in solutions of varying concentrations of penicillin. This effect was lost at high concentrations (Henson et. al. personal communication).  Using single doses of either 20 or 40 Gy to the hippocampus in a rat model of chronic spontaneous limbic epilepsy, a reduction in both the frequency and duration of spontaneous seizures was observed.  Histological evaluation of the targeted region revealed no signs of necrosis and hippocampal slice recordings revealed intact synaptically driven neuronal firing.  Subsequent work by the University of Pittsburgh group using a kainic acid-induced hippocampal epilepsy rat model revealed similarly efficacious results in terms of seizure control and the absence of behavioral impairment with subnecrotic doses of radiosurgery. 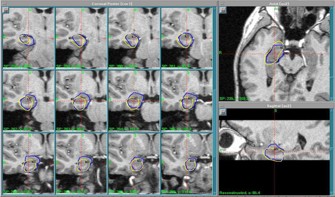 Biochemical analysis of changes in rats brains after Gamma surgery were done by Regis et. al. and showed changes in the concentrations of excitatory and inhibitory amino acids, particularly gamma-amino butyric acid.    Warnke et. al. showed that patients with low grade astrocytomas and associated epilepsy had significant relief from seizures following interstitial radiosurgery.  SPECT scanning  showed a reduced number of GABA receptors prior to treatment in both the tumors and surrounding brain. Levels of these receptors increased following therapy.  These early studies show that functional changes may occur at the cellular level without gross structural damage. The implications of this for functional neurosurgery are intriguing.

Epilepsy has been treated with the Gamma Knife at many centers but there have been few published long-term results. We have treated six patients, three of whom had structural lesions. The early results for the first three patients were encouraging with significant reduction in seizure activity but these results were not durable in the long term.

Barcia-Salorio et. al. treated 11 patients with idiopathic epilepsy. Pre-operative invasive electrodiagnostic confirmation of the epileptogenic focus was performed and treatment was with low dose (10-20 Gy) radiosurgery. Complete relief from seizures was obtained in four patients and significant reduction in seizure activity in five. The effect of the treatment was not seen for several months in most instances. Regis et. al. reported a case of mesial temporal lobe epilepsy treated with Gamma surgery. They used 25Gy given to the 50 percent isodose line. The patient was seizure free after the treatment. At 10 months a lesion was evident on both CT and MRI that conformed to the 50 percent isodose line (amygdala and hippocampus). Whether actual gross structural lesioning with this method is associated with better results or more complications is unknown. Further results of 25 patients with medically intractable mesial temporal lobe epilepsy treated by Regis et. al. (2000) showed that of the 16 patients with more than two year follow-up, 13 are seizure free and 2 are improved. In addition, they noted minimal morbidity (only three cases of nonsymptomatic visual field deficit) and no mortality associated with the Gamma surgery.

The potential of a less invasive, non-destructive therapy to treat epilepsy prompted the creation of prospective European and a National Institutes of Health (NIH) sponsored multicenter studies of Gamma surgery for temporal lobe epilepsy.   In the European study, three centers enrolled 21 patients with mesial temporal lobe epilepsy.  The anterior parahippocampal cortex, the basal and lateral portions of the amygdala, and the anterior hippocampus were targeted, and patients received a mean dose of 24 Gy.  At 2 years post-radiosurgery, 65% of the patients were seizure free.  However, 9 patients developed visual field deficits, and 5 suffered transient side effects including depression, headache, nausea, vomiting, and imbalance.  The NIH sponsored study, which began in the fall of 2000, randomized 40 patients into two dosage groups and monitored several clinical and radiological characteristics over three years following radiosurgical treatment. These evaluation points include the effect on seizure frequency and severity, magnetic resonance (MR) imaging (including diffusion- and perfusion-weighted studies), MR spectroscopy, and neuropsychological outcomes. Of the patients in the NIH study treated at the University of Virginia, improvements in their epilepsy have been observed.  However, one of the patients treated at another center as part of the NIH study experienced a serious adverse event that included persistent headaches, visual changes, and cerebral edema, and these consequences necessitated a standard temporal lobectomy. 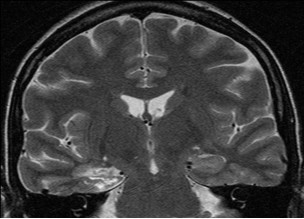 The safety and demonstrated short-term efficacy of Gamma Knife surgery for the treatment of epilepsies arising from space occupying lesions (e.g. low grade gliomas), hippocampal sclerosis, or hypothalamic hamartomas make it an attractive option.   However, Gamma Knife’s long term feasibility and effectiveness for epilepsy needs to be proved.  Also, it is unclear what underlying mechanisms are responsible for amelioration of seizures following radiosurgery.  Some have suggested a “neuromodulation” phenomenon following Gamma surgery with accompanying glial cell reduction, stem cell migration, neuronal plasticity and sprouting, and biochemical changes.  Rigorous scientific studies evaluation the cellular and subcellular mechanisms responsible for improvements in epilepsy post-Gamma surgery are thus far lacking.  Furthermore, the need for physiologic monitoring (e.g. depth electrodes, cortical grids) to determine conclusively the epileptogenic focus cannot be entirely discarded. Future developments of non-invasive physiologic monitoring will influence the development of Gamma surgery for epilepsy.  When everything is considered, one may contend that while gamma knife surgery may be used for functional diseases of the brain, the current efficacy of alternative methods dramatically limits the role of gamma surgery in the management of these diseases.